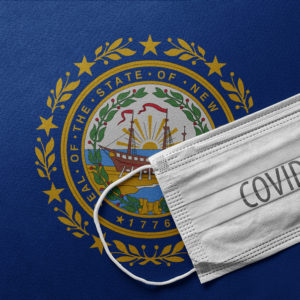 Gov. Chris Sununu said Monday that he has no interest in imposing a mandatory mask rule like the one taking effect in Massachusetts on Wednesday.

“We always recommend people wear a mask, of course. We recommend it, but we’re not at a point where we’re mandating and fining people for it, definitely not,” Sununu told radio host Jack Heath.

Sununu’s fellow Republican, Gov. Charlie Baker of Massachusetts, signed an executive order Friday requiring Massachusetts residents to wear masks in public beginning May 6. Bay Staters who don’t comply can face a fine of up to $300. “As we go forward, we’re all going to be — in many cases and many circumstances — expected to wear a face covering,” Baker said.

When asked by Heath if a similar order was inevitable in New Hampshire, Sununu said: “I’m hoping not.”

“We’re working, for example, with the retailers and the barbershops, they’re helping create the guidance document. So we don’t need to send the ‘stay-at-home’ police out there to start arresting people. That’s not the goal,” Sununu said.

“Just as we are seeing the highest rates of new COVID-19 cases and increased deaths, the Governor has decided to relax protections against the spread of infection. Fifteen percent of those cases will fill our hospitals in two weeks. There’s not sufficient testing, contact tracing or measures to mitigate the spread. We know masks/face coverings work by looking at South Korea and the Czech Republic that have nearly stopped the virus in its tracks.  The Governor is playing with fire,” Messmer said.

Polls show Americans in general and Granite Staters in particular tend to support more aggressive action on coronavirus rather than loosening guidelines. In a recent UNH survey, 68 percent of Granite Staters said they think maintaining the stay-in-place order is more important than reopening the economy, for example. Just 29 percent disagreed.

At the same time, Ohio’s Gov. Mike DeWine was forced to withdraw his proposed face-covering mandate. “It became clear to me that that was just a bridge too far,” DeWine, a Republican, said Sunday on ABC’s “This Week.” “People were not going to accept the government telling them what to do.”

That does not appear to be a problem in Massachusetts, a state known for big-government policies and restrictions on individual rights. Polls show Baker, a Republican in one of America’s most partisan-Democratic states, has widespread support for his handling of the coronavirus crisis.

“When you go out you put on a shirt, pants and shoes,” Curtatone tweeted. “For the near future, you’re going to need to add a face covering to that list.”

Sununu credits the people of New Hampshire for the Granite State not needing a mandate.

“The people of New Hampshire have taken this very seriously and responsibly,” Sununu said. “By taking this responsibility of physical distancing seriously, it allows us to move forward. If we start regressing them, then we’re going to have problems.”

“I think where we are today is probably where we’re going to be for a while in terms of masks and social responsibility,” Sununu said.