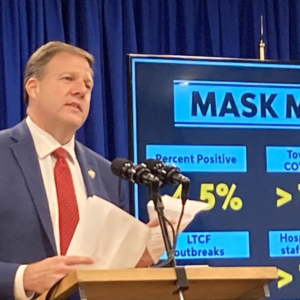 Sununu To Teachers Union: On COVID, We’re Following the Science, Not The Politics

At Thursday’s COVID-19 presser, Gov. Chris Sununu accused the New Hampshire’s teachers union of “politicizing the vaccination process” and challenged their argument that teachers belong in the high-risk Phase 1B group that will be eligible for vaccines beginning Friday.

“I think there’s a little bit of misinformation surrounding what we’re doing with schools and how schools are operating,” Sununu said “It’s become clear, frankly, that there’s a lot of leadership within the teacher’s union — as well as some in local leadership — who have politicized the vaccination process. They’re criticizing that the state has prioritized our first responders. They’re saying that teachers need the vaccine for schools to open.”

Sununu pointed out many New Hampshire school systems have reopened for classroom instruction, either fulltime or hybrid, and there have been minimal impacts on the virus’s spread. “As of this week, no K through 12 public school has experienced large outbreaks, virtually no transmission within school clusters. We have clusters, but virtually no transmission within those clusters in schools,” Sununu said.

Across the nation, teachers unions have been resisting a rising tide of data and science showing classroom transmission is rare and school children are not significant spreaders. In Europe, classroom education has been the norm since last August, with multiple studies finding little or no transmission among students.

Dr. Anthony Fauci, who has led the nation’s battle against the pandemic, said during a Harvard webinar that transmission in schools is lower than originally thought. “When you look at it, the number of children getting it is less than you would have expected, which is good news for keeping the children in school,” Fauci said. “It does not appear that the risk to the teachers is any greater than the risk they would face by being in the community in general.”

But in New Hampshire, the local chapter of the National Education Association has been fighting against classroom reopening for months, issuing mandates and making demands. Among the demands are a massive increase in taxpayer spending.

Now New Hampshire’s largest teachers union is demanding that they be placed in the same high-risk Phase 1B category as seniors over 65 years old and people with health conditions.

“We are calling on Governor Sununu to follow the lead of other states and prioritize vaccinating our teachers with high-risk first responders,” Megan Tuttle, president of NEA-NH, told NHPR.

As NHJournal has reported, there are 325,000 people in the Phase 1B group while the state expects to receive just 300,000 doses by the end of February. According to state estimates, putting teachers and staff in the high-risk group would add another 75,000 people competing for an inadequate vaccine supply.

“If you’re a teacher over the age of 65, or you have one of the [Phase 1B] medical vulnerabilities, of course, you as well will be able to sign up to get the vaccine. You’re a high-risk individual and you can sign up to get that vaccine as early as tomorrow morning.”

Asked by NHJournal what would happen if teachers were placed in Phase 1B given the limited vaccine supply, Sununu said “If that happened, tens of thousands of lower-risk people would get their shots before thousands of higher-risk people. I would put lives in danger.”

“Let’s get these kids back into school. I think that’s the real message here. We’ve shown it can be done successfully across the state. There’s no reason why everyone can’t look at those models, make their adjustments, and do what’s right by these kids. We absolutely have to put them first.”