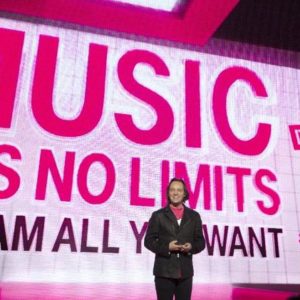 T-Mobile CEO John Legere introduces Music Freedom which allows customers to stream all the music they want from all the most popular music streaming services without ever hitting their high-speed 4G LTE data during the T-Mobile Un-carrier event on Wednesday, June 18, 2014 in Seattle. (Stephen Brashear/AP Images for T-Mobile)
News

T-Mobile Latest to Defy Regulators in Netherlands Over Zero-Rating

T-Mobile is joining the list of wireless carriers to defy accusations of violating net neutrality by regulators, this time in the Netherlands, where the company has been told to cease free data streams.

Shortly before Christmas the Netherlands Authority for Consumers and Markets declared T-Mobile’s unlimited music streaming service a violation of net neutrality rules against zero-rating, and ordered it discontinued. Dubbed Music Freedom and launched by T-Mobile Netherlands in October, the service exempts music streaming data use from subscriber monthly data caps.

In the U.S., Apple Music, Pandora, Spotify, Amazon, Google Play, Soundcloud and others have partnered with T-Mobile to sponsor their data on Music Freedom. Dutch regulators describe the practice as price discrimination that can unfairly influence the way subscribers use the internet, steering them away from online services either refusing or unable to pay T-Mobile to exempt their data.

“Dutch law is clear about zero-rating: it is not allowed,” ACM board member Henk Don said in a statement, referring to the Netherlands’ net neutrality rules clearly banning the practice.”There is no such thing as free data: it causes other services to become more expensive.”

Dutch regulators plan to fine T-Mobile 50,000 euros, just over $52,000 per day or a maximum of 500,000 euros ($521,000) until the Deutsche Telekom subsidiary complies. T-Mobile Netherlands responded saying not only was it unsurprised by the regulators’ decision, it will continue offering the service while it appeals the ruling to a court.

Zero-rating is increasingly becoming a popular tool among European telecommunications providers competing for subscribers in and around the European Union, where net neutrality rules surrounding zero-rating are similarly vague to laws in the U.S.

The two biggest wireless carriers in the U.S., AT&T and Verizon, struck equally defiant tones in December to the Federal Communications Commission in response to its probe of their zero-rating services.

“The Bureau’s approach thus would deny consumers a service they value, raise prices, lower consumption, and curb the disruptive potential of Data Free TV, all in the name of preserving profit margins for individual DIRECTV rivals,” AT&T wrote to the FCC’s Wireless Bureau last month. “That approach would upend the most basic principles of American competition policy, which is designed for ‘the protection of competition, not competitors.’”

Verizon gave a similar defense of its FreeBee zero-rating service, arguing the program “provides tangible benefits to consumers by increasing the amount of what they can do and watch online, at no cost to them.”

The letters marked the fourth in a back-and-forth between the FCC, AT&T and Verizon since a month earlier. A day after the election of Donald Trump as the next U.S. president–and a year after launching a probe into zero-rating–the FCC said AT&T’s plan to exempt its DirecTV-owned data from subscriber data caps could violate net neutrality.

After giving the company a chance to defend the practice, the FCC in December doubled down on its initial inquiry, saying its “preliminary conclusions” find the program does “inhibit competition, harm consumers, and interfere with the ‘virtuous cycle’ needed to assure the continuing benefits of the Open Internet.”

AT&T went a step further in its response, essentially telling the FCC not to waste either party’s time since the soon-to-be Republican-controlled FCC will likely undo any enforcement action. Republican Commissioners Ajit Pai and Michael O’Rielly say they plan to begin reigning in the rules at large “as soon as possible.”

“Those commissioners also observed that whatever judgment the bureau purports to pass on this program before January 20 will very likely be reversed shortly thereafter,” AT&T said.

The FCC, under Democratic leadership until January 20, has yet to respond.