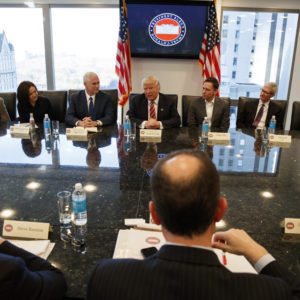 Tech Leaders Pivot to Trump After Donating Heavily to Clinton

Executives from the biggest tech firms in the U.S. met with President-elect Donald Trump at Trump Tower in New York Wednesday, where Trump appeared to extend an olive branch to the industry he criticized throughout the campaign season, and in reaction donated heavily to his opponent Hillary Clinton.

Apple CEO Tim Cook, Google parent company Alphabet’s Executive Chairman Eric Schmidt and Facebook COO Sheryl Sandberg, who were all vocal Clinton supporters, were among those invited to huddle with Trump, Vice President-elect Mike Pence, members of the Trump family and venture capitalist and Facebook board member Peter Thiel, the early and seemingly only support Trump received from Silicon Valley.

They represented three of the top four Silicon Valley firms to donate pennies on the dollars to Trump versus Clinton, with Alphabet donating $1,315,545 to Clinton and $21,924 to Trump, Apple $572,350 to Clinton and $4,366 to Trump, and Facebook $418,986 to Clinton and $3,965 to Trump, according to Open Secrets. The fourth was Microsoft with $710,334 to the former secretary of state and $31,372 to the president elect. Microsoft CEO Satya Nadella was also in attendance at the meeting with Trump.

Trump thanked executives for attending and inquired rhetorically whether they were enjoying the “Trump bounce” in the stock market, referring to the Dow’s record-breaking approach to 20,000 points following his election win and despite the Federal Reserve’s announcement to raise interest rates .25 percent.

“Everyone is this room has to like me at least a little bit,” Trump said in a meeting room video broadcast by CNN. “I’m here to help you folks do well. You’re doing well right now.”

Combined, the companies with representatives in attendance gave $131,618 to the Republican president elect and $4,169,828 to his Democratic opponent.

Trump said his door was open to hear suggestions from executives, and that his administration would have their backs in improving trade and generally trying to help them succeed.

“You call my people, you call me — it doesn’t make any difference — we have no formal chain of command around here,” Trump said.

The business mogul’s tone marked, at least on the surface, a departure from the barbs he lobbed at Silicon Valley on the campaign trail, where he slammed Apple for refusing to break its own default encryption to aid an FBI terrorist investigation, criticized Amazon for avoiding state taxes, vowed to oppose H-1B visas for skilled workers supported by Facebook and Microsoft, and moved to appoint staunch opponents to net neutrality regulations supported by much of the valley, including Google, which is unlikely to enjoy the same access it had to the White House during the Obama administration.

Particularly on the issue of H-1B visas, Trump initially expressed skepticism with the program for the potential that it displaces U.S. workers. But Trump softened his tone as the campaign continued, reversing himself on several occasions. He said during a debate on March 3, “I’m changing. We need highly skilled people in this country, and if we can’t do it, we’ll get them in. But, and we do need in Silicon Valley, we absolutely have to have.”

A number of tech companies have urged the expansion of the program because there are not enough American workers to fill some highly-skilled positions. Trump’s softening tone on the issue and his outreach to Silicon Valley may be indicators the program is unlikely to be scaled back as Trump stated early in the campaign.

Twitter CEO Jack Dorsey notably was not invited, reportedly for refusing the implement a “crooked Hillary” emoji for the Trump campaign during election season, according to a Hill report.