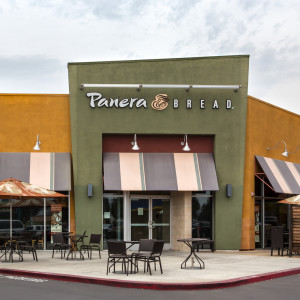 It began like any other trip to Panera. I stepped out my front door, walked the few blocks to the restaurant, and got in line at the counter. About five people were already waiting there — hardly unusual for a weekday morning.

But then one of Panera’s apron-clad staff members did something that was unusual: she asked if I’d like to order and pay on a touch screen.

“Sure, that’d be great,” I said, and the two of us walked over to a kiosk that hadn’t been there the day before.

In the next few minutes, as this helpful woman showed me how to buy the ice coffee I wanted, I realized that a phenomenon I’d only read about had arrived in my neighborhood: the phasing in of technology that some believe could replace many low-wage workers at restaurants.

In the case of Panera, touch screens are part of a new company technology strategy called Panera 2.0. Unveiled last year, its elements include letting customers place orders online, on their mobile devices and at kiosks to reduce wait times. The company has said these changes — to be rolled out through 2017 — are providing better work environments and producing “more jobs as Panera employees at these locations now provide table service.”

Stores “will eliminate one or two cashiers each,” according to a BuzzFeed News interview with CEO Ron Shaich, but “Panera has reassigned workers to monitor order accuracy, as the company found customers are more likely to customize sandwiches when ordering via an app.”

Technology could make dangerous jobs safer, or ease arduous work, she said. A slow phase-in could shift workers’ focus to better food and better service, rather than tedious order-taking and credit-card swiping, benefiting both consumers and workers. Just as few today mourn the mechanization of back-breaking agricultural labor, the decline of the order-taker could aid in the rise of a better quality of restaurant work.

Yet activists like Simran Noor of the Center for Social Inclusion, whose mission is “to dismantle structural racism,” remain concerned. In a piece for Al Jazeera, Noor argued that “the loss of jobs to technology will be devastating for the many workers of color who are barely making ends meet.”

She also suggested that, “Along with demands for increased wages, economic justice activists could focus on preserving worker jobs and advocating for a fair balance between labor and automation.”

Of course, the Washington Post is now reporting that fight for higher wages might be in tension with the battle for staving off automation: “The avalanche of rising costs is why franchisers are aggressively looking for technology that can allow them to produce more food faster with higher quality and lower waste.”

These issues may well come to the forefront if the District considers a 2016 ballot initiative to raise its minimum wage to $15 an hour. As InsideSources has previous reported, national Democrats are divided over the idea of the $15 wage, but the idea already has some support among members of the D.C. Council.