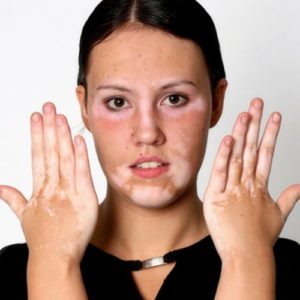 TeVido BioDevices, a Texas-based biotech company, plans in 2019 to begin treating patients with vitiligo (vit-ih-LIE-go) — an illness in which the body’s autoimmune system destroys the skin’s melanocytes (pigment-producing cells). The result is milky splotches and, in extreme cases, loss of pigmentation over much or all of the body. Vitiligo is especially visible in dark-skinned people, but it afflicts all ethnicities and is emotionally devastating for many.

TeVido’s treatment involves taking cells from a normally pigmented segment of the patient’s own skin and transplanting those cells to replace the damaged skin segments. The vitiligo treatment, if successful, will jumpstart TeVido’s previous plans for entry into clinical applications. The company’s longer-term goal has been the 3D-printing of a nipple for breast reconstruction. That effort, in turn, fits into biotech’s long-term goal of developing the means to manufacture larger organs (hearts, lungs, etc.) from patients’ own cells — obviating the need for transplant donors or lifelong immunosuppressant therapy.

TeVido’s effort demonstrates the virtues of entrepreneurship. Small, nimble entities can shift goals as opportunity and necessity appear. While nipple reconstruction is still a few years off, the development process offered the more rapidly attainable treatment for vitiligo. Success against vitiligo, in turn, makes it easier for TeVido to attract more investment dollars for the company’s longer-term efforts.

TeVido’s wheelhouse has been the application of 3D printing to reconstructive surgery. 3D printing is well-known for its industrial applications. For example, International Space Station astronauts constructed a ratchet wrench using software downloaded from ground control. While NASA’s printer uses a sort of glue as its construction medium, TeVido prints layer after layer of cells. That eventual dream — the ability to manufacture large replacement organs from patients’ own cells — faces a stubborn technological hurdle. With no functioning vascular system to nourish and hydrate the cells during construction, bottom layers begin dying before higher-up layers are completed. TeVido set its sights on nipple reconstruction because the nipple is a thin enough organ to complete the 3D printing job before necrosis sets in on the bottom layers.

Vitiligo involves even thinner tissue. Responding to my email query about its procedure, TeVido’s CEO Laura Bosworth explained: “As we developed our technology to re-pigment the nipple areola lost due to breast cancer, we realized this could benefit patients with vitiligo. And we can make this happen quickly.” TeVido’s initial vitiligo procedures will not involve 3D printing, but later versions of the treatment will.

Bosworth continued: “After the patient and doctor have decided this procedure is a fit, the physician will take a small sample of normally pigmented skin and send this to TeVido. The sample is very thin — about the same thickness as 3 strands of human hair. In TeVido’s FDA registered laboratory, we use aseptic processing techniques and certified raw materials in a cGMP compliant environment to prepare a cellular graft from the patient’s own skin. Our processing isolates the cells from the skin sample and dilutes them into a suspension. We ship this back to the physician, who transplants the cells to a larger depigmented area. The depigmented area is prepared by removing the very top layer of skin — think of it like a scrape or skinned knee, that heals in three to seven days. Pigment usually starts showing in 2-4 weeks and takes about 6 months to complete.”

Vitiligo is not currently curable, though for some patients, the destruction of melanocytes ceases at some point. TeVido’s procedure is limited to these stable cases. Time will tell how permanent re-pigmented skin patches will be, though clinical studies are very encouraging. However, if the milky patches start spreading again, the vitiligo is now active — destroying pigmentation. It is then possible to lose pigment at the treated spot. (As an aside, TeVido’s treatments will likely work, also, on depigmented scar tissue.)

In the meantime, TeVido’s breast reconstruction work continues apace. Women who receive nipple-sparing mastectomies often experience depigmentation of sections of the areola. TeVido hopes to begin restoring color in such cases this fall. TeVido’s original goal — recreating the color of a nipple of a “normal” mastectomy — will likely be a few years out.

In Bosworth’s words: “TeVido’s mission has always been about helping patients to feel ‘whole’ again.”