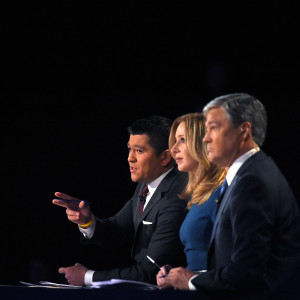 The Debate Over Debates: How We Got Here

Alan Schroeder has written about five decades of presidential debates, but he’s never seen anything like this week.

The past few days of maneuvering by Republican presidential campaigns to influence formats, moderators, and even questions for future debates is unprecedented, according the Northeastern University professor who authored Presidential Debates: 50 Years of High-Risk TV.

In a Tuesday interview with InsideSources, Schroeder explained why the issue of how to run debates pits the Republican National Committee against many of its candidates in addition to the news media: Following the 2012 White House race, the RNC expressed concern with how that election’s schedule of two dozen debates had affected its presidential candidate, former Massachusetts Gov. Mitt Romney. For example, party officials believed he had made statements during the primary that came back to haunt him during the general election, so they limited the number of officially sanctioned 2016 debates to nine and imposed other regulations.

The trouble is, the system set up by the RNC hasn’t sat well with many of this year’s candidates. Moderators at last week’s CNBC debate were widely panned, especially in conservative circles, for asking politically-motivated “gotcha” questions or inquiring about subjects seen as silly, such as fantasy football. This experience, combined with controversy over having a main debate for leading candidates and a “kids’ table” event for lower-polling hopefuls, has thrown the future of the debating season into question.

The RNC has pulled out of an NBC debate scheduled for next year. Then there was an ultimately failed effort by various presidential campaigns to agree on a series of demands for future debates. More than anything, the crumbling of that project speaks to what different interests White House hopefuls have based on their standing in the race. Underdogs tend to want more debates and opportunities to talk. Frontrunners tend to want fewer.

“The candidates all have their own agendas, and those may not be the same as the RNC’s,” Schroeder said. “You’ve got about 15 agendas going in conflict with each other, which is what makes this such a difficult and complicated thing to sort out.” One of the many complications is that Donald Trump, easily the biggest ratings draw in these televised confrontations, is now saying he’ll negotiate directly with television networks regarding his participation in future debates.

According to Schroeder, the people who get lost in these discussions are the voters. “I think the candidates run a risk here of making this be too much about themselves and their own little problems,” he said.

Of course, many conservative voters would like changes to the debates, particularly if they meant more time devoted to issues they care about. Several candidates and conservative commentators have argued that primary debate moderators should in fact be Republicans, or at least be ideologically aligned with the GOP field. The Blaze’s founder Glenn Beck has offered to host a forum, and several candidates have already indicated they would attend.