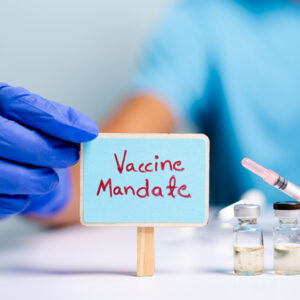 The Fifth Circuit Court of Appeals put a hold on the Biden administration’s requirement that all businesses with 100 or more employees must have a vaccine requirement.

A group of states led by Texas had challenged this Occupational Safety and Health Administration’s requirement that those workers either get vaccinated by January 4 or have to wear masks and be tested regularly, arguing that it was an illegal overreach of the administration’s power.

In more normal times, these kinds of decisions usually apply only to the states within that circuit court’s district. However, this group of states argues the language used by the Fifth Circuit should give this decision national scope.

It is commonly accepted that not only is this kind of regulation within the scope of what OSHA does, but also that it is an agency empowered to act quickly through this kind of emergency temporary standard to protect the health and safety of workers.

The regulation in issue would come with $14,000 fines to the business for each violation. As has been the case with each and every workplace regulation since the pandemic began in March 2020, there are arguments on both sides of the balance between public safety and individual liberty. Here, the Fifth Circuit latched on to the latter.

Several of the court challenges claim that the OSHA regulation is overbroad, going beyond the agency’s power to regulate safety in the workplace and into public policy. That argument may be specious when applied to an emergency measure, as the line between workplace and public safety is quite blurred at the moment, which may not in itself be a bad thing.

Roy Konray, a lawyer at Team Law, argues that nothing is yet written in stone here:

“Before opponents and proponents start celebrating or despairing, it’s important to note that the first effective date for the ‘vaccinate or wear a mask indoors at work’ mandate is December 5. The three-judge panel in the Fifth Circuit only heard from the opponents of the mandate and said they want to hear the government’s response by 5 P.M. on November 8. Given the immense importance of a final decision on the mandate, the court may decide to hear the case en banc with all 17 Fifth Circuit judges participating.”

It also seems highly unlikely that this decision of the New Orleans-based circuit court is going to go unchallenged. With the U. S. Supreme Court granting expedited reviews these days for pressing issues of national importance, especially in the areas of public health and safety, this could end up on the Supreme Court’s lap in a hurry.