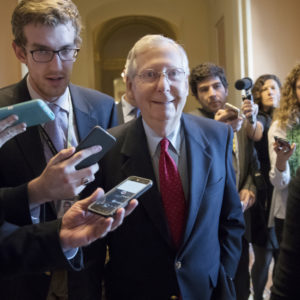 While America’s political press is already obsessed with 2020’s presidential race, Republicans got some largely unnoticed good news about their hopes to hold the US Senate.

Fortunately for Democrats, Gov. Sununu has pledged not to run for the Senate,  and Iowa Democrats still have plenty of time to find a strong challenger to take on Sen. Ernst.  But given the challenging 2020 map for Republicans, they’ll take any good news they can get.

In last year’s midterms, the GOP’s favorable position was on full display. In a year when Democrats picked up 40 seats in the House—one of the biggest single-year pick-ups in history—and flipped seven governor’s mansions from red to blue, Republicans still picked up two seats in the Senate.  The 2020 landscape, however, isn’t nearly as favorable.

Republicans must defend 22 seats next year, compared to the Democrats’ twelve.  And analysis by both the Cook Political Report and FiveThirtyEight.com finds that while all but two of the Democrats are in safe seats, at least nine Republican senate races are in play in “likely/lean GOP” states.

Democrats, for example, have just one race, Sen. Doug Jones in deep-red Alabama, that can fairly be considered a toss-up against a typical Republican opponent.  Republicans on the other hand, have four Senators running for re-election in truly swing states: Susan Collins in Maine, Joni Ernst in Iowa, Cory Gardner in Colorado, and Martha McSally, who was appointed, not elected, in Arizona. And the GOP also has two open seats, in Kansas and Tennessee, while Democrats have none.

Having nearly twice as many seats to defend means spreading Republican resources thin. Having to defend seats in swing states makes the task even tougher. And then there’s the Trump factor.

Immediately after the 2018 midterms, former Reagan/Bush politico Ed Rogers declared “Democrats may have won the House, but Trump won the election,” based on the GOP’s results in the Senate.  But the story isn’t quite so clear.

Yes, it’s true that Republicans picked up states like Indiana and Missouri, but these states were already trending Republican.  If Trump’s pleas for midterm support drove Republicans to the polls, these states had plenty of GOP voters to draw from.  But in more purple or blue states,  the anti-Trump turnout swamped any uptick in the Republican vote. And so in purple places like Arizona and Nevada, Republicans lost.

It appears the net result of the Trump effect was states that tended to be red, like Indiana and Missouri, got a bit redder (with the exception of West Virginia) while swing and blue states turned a bit bluer.  If that happens in 2020, it will be very bad news for Republicans.

With five competitive races and only one of them in a red state (Alabama), the net result could be a Democratic pick up of three seats—and a 50-50 Senate.  To hold the majority, Republicans would have to win the White House, too.

But would 2020 really look like 2018?  It’s hard to imagine Democratic turnout declining from 2018 to 2020, but it’s also hard to see it increasing significantly, either. Republicans, on the other hand, could create their own pro-Trump red wave which, while unlikely to topple Senators in Massachusetts or New Jersey, could protect incumbents in Iowa or Maine.

Right now, Donald Trump is under water by more than 10 points in both Iowa and New Hampshire. And yet in both those states Republicans are, on paper at least, competitive,  or even in the lead.  Gov. Sununu says that not only is President Trump popular among New Hampshire Republicans but  “I think he has a very good shot at winning the state’s four electoral votes come the general election.”

If President Trump can improve his numbers by just a few point in swing states like these between now and November 2020, Democrats could have an unpleasant surprise at both ends of Pennsylvania Avenue.