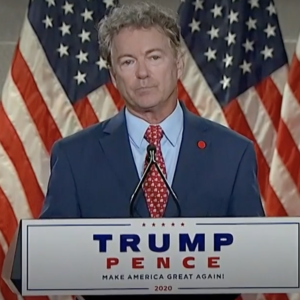 The Libertarian Case for Donald Trump

Fair warning: A man is about to be damned with faint praise.

But these are extraordinary times, and perhaps “all things considered, the other guy’s worse” is a profound compliment. That’s why this libertarian is voting for Donald J. Trump, and recommending that my fellow opponents of the welfare-warfare state do the same.

Stay with me on this. We’re going to focus on three areas of vital importance to the limited-government cause where the president is unquestionably preferable to Joe Biden: foreign policy, regulation and judges. Taken together, they make a convincing case for reelection.

In August, at the Republican National Convention, U.S. Sen. Rand Paul (R-Ky.) — who as a competitor for his party’s presidential nod in 2016 derided Trump as “a delusional narcissist and an orange-faced windbag” — touted their shared belief that America “must not continue to leave our blood and treasure in Middle East quagmires.”

The commander in chief “is the first president in a generation to seek to end war rather than start one,” while Biden “voted for the Iraq War, which President Trump has long called the worst geopolitical mistake of our generation.”

With most GOP pols and “defense intellectuals” still mired in silly neoconservative nostrums about “national greatness” and America’s “unipolar moment,” it’s a wonder the president hasn’t been brainwashed into launching disastrous military adventures in dozens of countries.

But 45 months into office, Trump’s body count is remarkably low. And in at least once instance, his bad-boy bravado gave way to remarkable restraint.

In June 2019, Reuters reported that Trump “aborted a military strike to retaliate for Iran’s downing of an unmanned U.S. drone because it could have killed 150 people.” Presidents aren’t supposed to weigh considerations such as proportionality. Think Hillary Clinton would have?

From the start of his quest for the Oval Office, Trump roared that as a killer of job- and wealth-creation, regulation can be as lethal as taxation.

And in power, he’s backed up his rhetoric with an imperfect, but nonetheless strong, assault on red tape. His administration has proposed a “new rule under the National Environmental Policy Act to completely overhaul the dysfunctional bureaucratic system that has created … massive obstructions,” gutted the Obama administration’s expensive and unnecessary “Clean Power Plan,” and established “much needed regulatory certainty and predictability for American farmers, landowners and businesses” regarding whether “water on their land may or may not fall under federal regulations.”

The White House’s crusade against eco-alarmism is so broad, The New York Times, “based on research from Harvard Law School, Columbia Law School and other sources,” has documented “nearly 70 environmental rules and regulations officially reversed, revoked or otherwise rolled back under Mr. Trump.”

The sound of junk-science peddlers wailing is sweet music to economists, policy analysts, writers, and activists who understand that the war against pollution was fought, and won, long ago.

The battles to destroy identity politics and disastrously counterproductive “public health”? Their victors are yet to be determined. And that’s why another four years of Trump picking federal judges is desirable.

Exhibit A: William S. Stickman IV. Last month, the federal jurist ruled that the draconian COVID-19 measures imposed by Gov. Tom Wolf (D-Pa.) violated the First and 14th Amendments, writing that “[b]road population-wide lockdowns are such a dramatic inversion of the concept of liberty in a free society as to be nearly presumptively unconstitutional.”

Look, if you’re a liberty lover in South Dakota or Connecticut or Kentucky or Hawaii, and can’t get past “trade wars are good, and easy to win,” and/or the creation of the U.S. Space Force, and/or zero progress on entitlement reform, go right ahead and not vote — the default for many of us — or throw a little pity on Jo Jorgensen.

But fighters for freedom in New Hampshire, Pennsylvania, Ohio, Florida, Michigan, Wisconsin, Arizona, and Nevada? Hold your nose, and vote for The Donald.

Make America Libertarian Again isn’t on the ballot this year. Even if Jorgensen were to pull off a presidential upset that would make 2016 appear boring, she would not have anywhere near the votes needed in Congress to cut the federal government to the size it was in 1895.

Like it or not, it’s Biden or Trump. This libertarian’s going with the latter, and won’t lose any sleep over the decision.