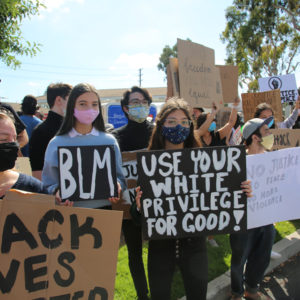 The Movement for Black Lives Is a Small-Town Movement, Too

Something’s happening — and not just in America’s big cities.

In small towns around the country, often the places you would least expect, people are having protests with signs that say “Black Lives Matter,” “I Can’t Breathe,” and “Defund the Police.”

My tiny town in Prince George’s County, Maryland, is home to a substantial black population. But it’s had quite a few protests filled with white demonstrators. The most recent one brought hundreds to a park on the edge of town where black residents were historically confined, not allowed to integrate into the “town proper.”

And we’re finally removing the historic plantation from the town seal.

Elsewhere, a friend living in a conservative coastal enclave in Massachusetts — as close as one gets to Trump Country in New England — recently decided to swallow her fear and organize a protest.

It started on her lawn with some tentative neighbors, all white, all with homemade signs proclaiming that black lives matter and that George Floyd should be alive today. A social media post about taking the protest to their little downtown got 500 “likes” in a matter of hours.

Researchers have found that the protests stemming from the police killing of  Floyd are the broadest in U.S. history. The sheer number of locations of protests have already surpassed those of the 2017 Women’s March, which previously held that record.

Turns out a whole lot of Americans don’t like racism or police brutality — even in conservative, white, rural, or southern towns. For many white Americans, the sheer, nonchalant cruelty of Minneapolis police officer Derek Chauvin appears to have burst open a door that was padlocked for too long.

And, importantly, that realization appears to be crossing partisan lines. A recent Yahoo News/You Gov survey found that 84 percent of Americans approved of the firing of the police officers who were involved in the killing of Floyd. Nearly 70 percent say they believe Chauvin should indeed be charged with murder.

Will this kumbaya moment of black, brown and white people marching together translate into changes in how we think, as communities, of public health, safety and well-being? Historically, that’s been difficult — but times may be changing.

House and Senate Democrats have introduced the Justice in Policing Act of 2020, the most comprehensive policing reform legislation ever suggested in Congress. It would ban chokeholds, make it easier to charge police officers with brutality crimes, and end the no-knock warrants that killed an innocent EMT, Breonna Taylor, while she slept in her own bed in Louisville, Ky.

The Republicans in the Senate, however, are unlikely to support the act’s broad provisions.

Civil rights groups like the Movement for Black Lives have long called for alternatives like defunding, demilitarizing or disbanding the police.

As these demands enter into the mainstream, and even as the city of Minneapolis moves to do just that, it remains to be seen whether the unity forged by Americans’ shock at blatant police violence and racism will be sustained. Presumptive Democratic presidential nominee Joe Biden just announced his campaign will not support defunding the police, for example.

But just because it’s always been that way doesn’t mean it has to be. The moral authority is clearly with black folks leading the call for an end to a failed system of retributive justice and racist policing, and white folks have been brought along as never before.

We’re in a new moment. We’ve had a glimpse of unity. With the padlock removed and the door pushed wide open, it just takes some courage for more of us white people to walk through the door and prove that, to them, black lives really do matter.