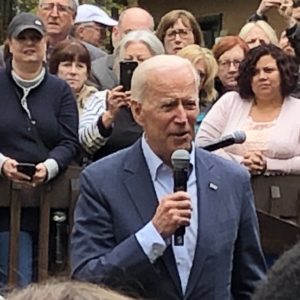 Joe Biden answers questions from the crowd at a campaign stop in Nashua, NH on May 14, 2019.
News

As Joe Biden prepares to deliver an Inaugural Address he’s been rehearing since (at least) 1988 when he first ran for the office, what does New Hampshire hope to hear from the new president? NHJournal asked a variety of Granite Staters from across the political spectrum for the one word or phrase they most want to hear in Biden’s speech on Wednesday.

One theme emerged, summarized by NHGOP Chairman Steve Stepanek’s response: “Unity.” Politically-active Granite Staters say they are ready for the political combat of the past four years to come to an end. Unfortunately, Stepanek said, “Biden’s not doing a great job so far.”

“Time for healing,” was the phrase picked by Stepanek’s Democratic counterpart Ray Buckley, though like Stepanek, he didn’t sound ready to start quite yet, either. “So much of what made America strong, admired and aspirational, was torn to tatters by lies, hate and violence these past four years,” Buckley added.

“Facts, truth and decency are essential for America’s future.  We need to pull together and return to the work of providing the opportunity for every American to attain their American Dream.”

A new Scott Rasmussen poll finds Americans want Washington to put unity ahead of party, too.

“Sixty-one percent of voters want President-elect Biden to build a larger governing majority with policies that can win over some Republicans and other Trump supporters,” according to Rasmussen. “Just 17 percent want him to ignore the concerns of his political opponents and try to implement as many Democratic policies as possible.

“Other than Very Liberal voters, a majority of every measured demographic group wanted the incoming president to build a larger governing majority by finding some common ground,” Rasmussen said.

New Hampshire’s Republican Gov. Chris Sununu had a more specific message he’s hoping to hear: “Providing flexibilities to states.” The phrase echoes Sununu’s theme that state and local governments have been better at solving problems, particularly the challenges from COVID-19, than the federal government.

That theory is currently under fire as states struggle to distribute the vaccines now available thanks to the Trump administration’s Warp Speed program. However, New Hampshire’s consistently been one of the top 10 most successful states on a percentage basis for vaccine distribution.

“If he says it, it will be in quoting Micah 6-8, which will be a fitting guide for the new administration and a decisive and welcome change in course,” Volinsky told NHJournal.

“He has told you, O man, what is good, and what the LORD requires of you, except to do justice, and to love mercy, and to walk humbly with your God.”

The Josiah Bartlett Center’s Andrew Cline addressed the same theme as Sununu, but (not surprisingly) in a more academic way. “My word is ‘federalism.’ Because one of the sources of our political conflict comes when Washington, DC tries to impose a one-size-fits-all solution on 50 very different states. I’d like to hear Biden say he’s going to let Texas be Texas and Vermont be Vermont.”

From the business community came calls for cooperation and moderation. Jim Brett of the New England Council said the word he’s listening for is “collaboration.”

“Collaboration – whether it is bipartisan cooperation within the federal government, or collaboration between government and business community – is vital to getting our economy back on track,” Brett said.

“It would be nice to hear him say something about his economic plan that will not cost small business owners more money. The word many small business owners want to hear is ‘restraint.’  This is still a just-right-of-center country,” Berke said. “If he shows no restraint, the pitched battle between the left and right gets more fierce and then everyone loses.”

And former NH Democratic Committeewoman (and Union-Leader columnist) Kathy Sullivan reached across the aisle for a quote from a Republican president she wants Biden to use.

“Gerald Ford said it best,” Sullivan told NHJournal. “‘My fellow Americans, our long national nightmare is over. Our Constitution works; our great Republic is a government of laws and not of men. Here the people rule.'”

Based on reporting in advance of his remarks, it’s likely that President Joe Biden’s first address to America will be a call to set aside partisanship in the name of unity. But in New Hampshire, and across the nation, it’s clearly much easier said than done.

As former congressman and current state Sen. Jeb Bradley (R-Wolfeboro) put it: “The phrase I want to hear is ‘American Unity,’ but his actions are going to speak the loudest.”