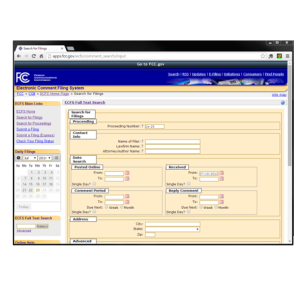 The Substance of FCC Comments

For those interested in reading the public comments submitted to the FCC on net neutrality—good luck. The government agency, which some argue should have regulatory authority over the internet as a public utility, happens to be using unbelievably backward technology.

Your correspondent has spent the past day working to evaluate the contents of many of the submissions made over the course of the comment period, which began in mid-May and ended last Friday. Glitches abounded in attempts to download records, and even when successfully downloaded, the website capped file exports at 10,000. This makes any attempt at a full analysis of 1.1 million comments to be exceedingly difficult.

Still, InsideSources had some success evaluating the nature of these comments—despite spending an inordinate amount of time doing so.

Much has already been written on the lack of decorum and mature debate found in the comments. When searching the FCC site, thousands of results contain profanity. Many are incoherent rants.

Of course, there are many more results that make rational arguments. But when one reads through these, it is immediately apparent that a tremendous number are form letters. Based on text searches performed and reviews of mass filings with numerous authors, InsideSources estimates that approximately 250,000 comments are form letters.

As mentioned previously, it is very difficult to provide an exact number, so there is some margin of error. InsideSources requested that the FCC provide us with a full data file for review, but the Commission did not respond.

Additionally, the use of form letters and the brief nature of many of the non-form letter comments that were submitted raises some questions regarding the legitimacy of those commenting to the FCC. InsideSources asked the FCC whether the Commission tracks the IP addresses of those submitting or has any means to verify how many comments a specific person has submitted. The FCC press office did not respond.

To its credit, the FCC has since released downloadable files of the public comments for further analysis.

The Knight Foundation, which advocates for net neutrality, commissioned analytics firm Quid to take a closer look at the FCC’s data. Among the noteworthy findings is that men substantially outnumber women in the number of comments submitted.

Additionally, the Quid analysis estimated that at least 30 percent, but perhaps as many as 50 percent, of the comments filed were based on templates. This is roughly in line with the earlier analysis from InsideSources, which found that at least 250,000 comments were form letters.