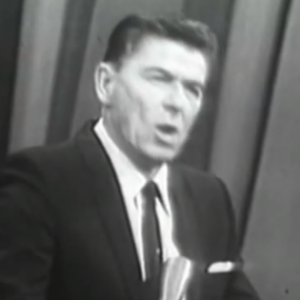 The Words Echo Reagan, but Cruz Attributes Quote to His Dad

A favorite anecdote of Texas Sen. Ted Cruz has gone unquestioned on the 2016 campaign trail, despite its similarity to lines from an iconic Ronald Reagan speech.

The senator’s father, Rafael Cruz, a prominent surrogate in his son’s Republican bid for the presidency, included the story in his book released Tuesday. Both men remember the elder Cruz, a refugee with a harrowing story of suffering under Cuban dictatorship, telling a young Ted repeatedly, “When I faced oppression in Cuba, I had a place to flee. If we lose our freedom here, where do we go?”

That language echoes a very similar passage from Reagan’s landmark 1964 speech, “A Time for Choosing,” in which the then-California governor said, “If we lose freedom here, there’s no place to escape to.”

The relevant portion of those remarks, in which Reagan touted GOP White House hopeful Barry Goldwater, notably also centers on a refugee from Cuba.

“Not too long ago, two friends of mine were talking to a Cuban refugee, a businessman who had escaped from Castro, and in the midst of his story one of my friends turned to the other and said, ‘We don’t know how lucky we are.’ And the Cuban stopped and said, ‘How lucky you are? I had someplace to escape to.’ And in that sentence he told us the entire story. If we lose freedom here,” Reagan said, “there’s no place to escape to.”

Sen. Cruz, born in 1970 after his father came to Texas in 1957, has been a diligent student of Reagan since childhood. Starting as a boy, he “used what he says is his near-photographic memory to learn the president’s speeches,” according to the Wall Street Journal. He “also began reading all the literature on Mr. Reagan he could get his hands on, and now says he has read everything he can find.”

Yet as the senator has relayed his father’s anecdote regularly in speeches, paid advertisements and press interviews — at least since running for Texas attorney general in 2009 — he appears never to have connected it with the former president’s vignette. The public is left to assume the quote originated with Rafael Cruz, not Ronald Reagan.

The Cruz campaign didn’t respond to InsideSources’ request for comment Wednesday on whether the lines were lifted from Reagan, but a spokesman for the senator addressed the question in the Dallas Morning News in 2012.

“The sentiment expressed by President Ronald Reagan is the same — that liberty is precious, and America is the last, best hope for mankind,” Cruz aide James Bernsen said. “And it is what Ted’s dad told him over and over again, as Ted was growing up in Houston.”

It’s impossible to fact-check memories from a politician’s childhood, but there’s no question Cruz was deeply influenced by his father’s experiences from a young age.

What’s also grown clearer in nearly four years since that article is the senator’s particular reverence for the original Reagan speech. Cruz refers to “A Time for Choosing” regularly, including with his current campaign slogan and book title. (His father’s book, “A Time for Action,” is another apparent reference.) He even taped a 2014 Young America’s Foundation video reflecting on the significance of Reagan’s address, touting the refugee anecdote as “one of the most well-known segments.”

Cruz and his father have received increased scrutiny in recent days, with the senator seen as the favorite to win his party’s presidential nomination if voters end up rejecting front-runner Donald Trump.

The Daily Beast this week detailed some of the flattering misconceptions Cruz has left uncorrected about his father, whose story — including religious conversion to Evangelical Christianity — delights conservative audiences.

Among the misconceptions: that Rafael Cruz fought Fidel Castro and communism in Cuba. While it’s true that the senator’s father was jailed and tortured as teenager, that happened under rightist dictator Fulgencio Batista. It was before the rule of Castro, with whom the elder Cruz was in fact allied to oppose Batista.

Additionally, Rafael Cruz has been described repeatedly as a pastor in suburban Dallas. He isn’t one. He’s an ordained minister, but he’s never led a church.

The Beast piece came following a New York Times story in November, in which Cuban contemporaries said the senator’s father has “an embroidered” personal history. It remains to be seen whether his “if we lose our freedom” quote will raise more eyebrows in that context.
Watch Cruz at 0:30: