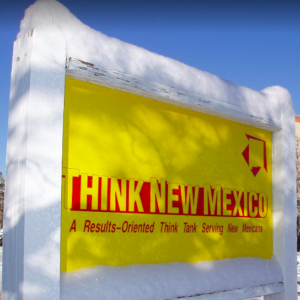 In a state that ranks third highest in the nation for the percentage of seniors living in poverty, a Santa Fe-based think tank is proposing several changes in New Mexico state law, including a repeal of a tax on Social Security benefits.

According to the Think New Mexico initiative — “Solving the Hidden Crisis: Achieving Retirement Security for All New Mexicans” — the state’s growing retirement predicament not only affects senior citizens, but also the average taxpayer who funds Medicaid, housing assistance and other government support programs for the elderly.

The state has 12.2 percent of its seniors living on income that drops below the federal poverty line of $12,490 a year for a household of one — just below the average Social Security benefit of $13,900, according to the think tank initiative’s initial report.

Think New Mexico says the percentage of the state’s elderly poor will likely grow in the coming years, as two out of three private-sector workers in the state do not have any money saved for retirement and 80 percent have less than $10,000 saved. In addition, the state’s public pensions are underfunded by a total of $12.5 billion, putting their long-term soundness in danger.

New Mexico is one of just 13 states that charge income tax on Social Security benefits to at least some beneficiaries, according to the American Association of Retired Persons. Scuttling the tax — which was enacted in 1990 — would add $700 a year to the average state senior citizen’s income, the Think New Mexico report says.

“Most states do not tax social security benefits because they want to attract and retain retired people for their economic impact — for their positive economic impact on the state — and we should do the same in New Mexico,” Nathan told InsideSources. “For example, Kiplinger’s magazine profiled the 13 states that still tax Social Security benefits and listed New Mexico as one of the least tax-friendly states for seniors.”

“In order to achieve retirement security for all New Mexicans, we need to increase access to retirement accounts for private-sector workers and stabilize pensions for public sector work,” Nathan said.

Use some of the state’s record budget surplus to make a one-time, $700 million cash infusion or bridge loan to the Public Employees Retirement Association (PERA); consolidate the investment management of PERA and Education Retirement Board pension funds to achieve higher returns and lower fees; and make the pension oversight boards more professional by increasing the qualifications of those who serve. (Currently, no member of the PERA board, which oversees $15.7 billion, is required to have any experience or expertise in financial or investment management.)

Nathan said he hoped the state Legislature would take up the issue when it meets for 30 days in January, although reports have noted the schedule is tight.