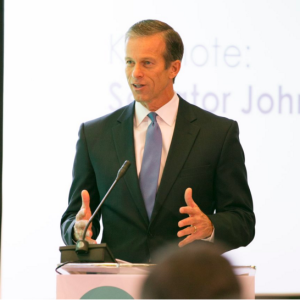 Thune Announces Return of Bill to Free Up Airwaves for Wireless

South Dakota Republican Sen. John Thune told a crowd at a tech event in Washington Tuesday he’s ready to revive his bill to open up “hundreds of megahertz of spectrum” to the mobile market to help wireless providers keep up with the demand for bandwidth-heavy services like video streaming, and accelerate the development of new, faster services like 5G.

“This legislation will ensure hundreds of megahertz of spectrum are made available for commercial use by the year 2020, the same year many people expect to see the 5G standard formally adopted,” Thune, who chairs the Senate Commerce, Science and Transportation Committee, said in his keynote to a conference discussing the development of 5G at CTIA’s headquarters in Washington Tuesday.

The Making Opportunities for Broadband Investment and Limiting Excessive and Needless Obstacles to Wireless, or MOBILE NOW Act, would free up more bandwidth by compelling federal agencies, which hold some 60 percent of all available spectrum, to be more efficient in what they use and turn the rest over to the private sector.

Thune said finding and opening up specific bands for licensed and unlicensed use, removing legal and regulatory barriers, and pushing the government to examine the use of high-frequency millimeter waves were all key to “securing the bandwidth needed to fuel multi-gigabit Internet speeds,” and accelerating the deployment of 5G.

“The bill would cut through much of the bureaucratic red tape that makes it difficult to build wireless facilities on federal property, and it will direct the FCC to take action on streamlining regulations affecting small cell networks,” Thune said. “And while 5G may still be years away from reality, these are the kinds of incremental steps forward that we need to bring the future closer to us today.”

The South Dakota senator said with so much less spectrum than was available twenty years ago, and with the squeeze on the most popular bands, it’s never been more crucial — and subsequently more difficult — to get more spectrum into the hands of wireless providers, who are in danger of running out in the next five years, according to Federal Communications Commission Chairman Tom Wheeler.

Thune’s committee planned on marking up the bill last fall, but was forced to pull it amid a cramped year-end legislative calendar. The chairman said he and ranking Florida Democratic Sen. Bill Nelson are close to finalizing the details of the bipartisan bill, and hope to reintroduce it as soon as this week.

“Our colleagues in the House are also working on their own wireless legislation, and I am confident we should be able to marry up our efforts and enact a good, bipartisan, pro-growth bill,” Thune said.

Commissioner Jessica Rosenworcel of the FCC, which is preparing to tackle the spectrum issue via an auction to sell airwaves from broadcasters to wireless providers this spring, agreed on the need to go higher, explore high-frequency millimeter waves and make it easier for the government to experiment with ways to free up more spectrum.

“This is spectrum that is way, way up there,” Rosenworcel said. “These are the airwaves that take us to infinity and beyond.”

Rosenworcel sided with Thune on making it easier to build wireless towers on federal land, a designation that covers 1/3 of all national real estate. The two also agreed on the need to find a way around the typically low scores the Congressional Budget Office bestows on wireless spending bills.

“This analysis is important. It’s useful. But in practice, these estimates can hamper creative ideas about long-term infrastructure investment, including how we can free more of our airwaves to support economic growth,” Rosenworcel said.

The commissioner added her agency has progress to make as well, including handing out licenses for experimenting with unlicensed spectrum to establish “sandboxes of innovation” in major cities.

“While we are home to less than five percent of the globe’s population, we have one-third of all 4G subscriptions worldwide,” Rosenworcel said. “But it is clear that the race to 5G is on.”