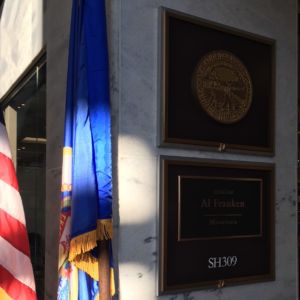 Al Franken's name will not adorn this office much longer. Credit: InsideSources
News

It’s official. Despite delivering a resignation speech that left many people wondering if he had resigned at all, Al Franken is on his way to being a former senator from Minnesota. Last week, Senator Franken, Democrat, delivered a carefully worded apology on the Senate floor, saying that he would be resigning his seat, but failing to specify when this resignation would take effect. Today, Governor Mark Dayton nudged Franken towards the door when he named current Lieutenant Governor Tina Smith to fill Franken’s seat until the 2018 midterms. Although expected, Smith’s appointment sets the stage for further battling between state Republicans and Democrats over who will replace her as lieutenant governor.

“Tina Smith is a person of the highest integrity and ability,” said Dayton. “There is no one I trust more to assume the responsibilities of this important office. I know that she will be a superb senator, representing the best interests of our state and our citizens.”

Smith was seen as a likely replacement for Franken. She served as Dayton’s chief of staff before being elected to her current position and as chief of staff to the former mayor of Minneapolis, R.T. Rybak. From a policy standpoint, Smith will likely hold similar, consistently-Democratic, positions to Franken.

In accepting the appointment, Smith recalled former Minnesota Senator Paul Wellstone (D), saying that she was committed to a world where “we do better when we all do better.”

“Though I never anticipated this moment,” Smith said, “I am resolved to do everything I can to move Minnesota forward, and I will be a fierce advocate in the United States Senate for the economic opportunity and fairness.”
On the other hand, Tina Smith’s appointment demonstrates how state politics in Minnesota are balanced on a knife’s edge. According to the state constitution, when she takes Franken’s place in Washington, the lieutenant governor’s seat will be held by the president of the state senate, Republican Michelle Fischbach will step into the lieutenant governor seat. Currently Republicans hold a single-seat majority in the state senate. If Fischbach leaves, state Republicans fear that their ability to pass legislation could be stymied.
“It’s an underhanded ‘House of Cards’ style move,” Republican Party of Minnesota Chair Jennifer Carnahan said of Smith’s appointment. “This is clearly an attempt to throw the Republican majority in the Minnesota Senate out of balance.”
Republicans want to see if Fischbach can serve simultaneously as president of the senate and lieutenant governor. Thus far, the Senate Counsel’s office has agreed, citing an 1898 state supreme court decision on the matter. Circumstances were slightly different then. In 1898, the lieutenant governor presided over the Senate. A constitutional amendment in 1971, however, separated the two positions. For a period of three months in 1936, William Richardson served as both president of the senate and lieutenant governor after the death of Governor Floyd Olson resulted in the elevation of the previous lieutenant governor.
Minnesota’s Democratic Attorney General Lori Swanson, whose name was also floated as potential replacement for Franken, has been asked to give a formal opinion on the issue. If Fischbach is not able to serve in both positions simultaneously, her seat would be up for a special election. Republicans, who currently hold a slim 34-32 majority pending the results of another special election, fear that their political opponents could string out the process to prevent them from effectively using their majority.
Given tensions between the two parties, the issue could easily end up in court. Already, Minnesota has seen a series of odd constitutional lawsuits in 2017, as Dayton attempted to line item veto the legislature’s budget over a dispute about taxes. If Fischbach’s appointment ends up going to court, it would likely be heard by either the state Supreme Court or the Ramsey County court, both of which ruled on the budget issue earlier.
Letting Fischbach occupy both seats makes Democrats nervous for several reasons. Not only would she be able to exert influence in the state legislature, but many have fears about Dayton’s health.
“I think that it is easy to understand why Democrats are nervous and are likely to challenge this in court,” says Kent Kaiser, a political communications professor who formerly worked for the office of the Minnesota Secretary of State. “You have a Republican a heartbeat away from the governorship.”
Dayton had already announced that he would not be running for reelection in 2018. Both Minnesota U.S. Senate seats will now be on the ballot as well. Tina Smith has announced that she intends to run for the seat, but is likely to face primary challengers. Meanwhile, Republicans are beginning to float names including Reps. Tom Emmer, Eric Paulsen, and Jason Lewis.
It does look like Franken may not linger in the state after leaving the Senate.
“Franken didn’t really have any legislative accomplishments to speak of, even with a Democratic president,” said Kaiser. “His goal was to be a bulldog and the accusations undermined his ability to continue to do that. I don’t think that he could really have that voice anymore from Minnesota, the media market isn’t big enough. He never really had a voice here.”
Franken moved to Minnesota in 2005 before announcing his candidacy in 2007.
Follow Erin on Twitter.