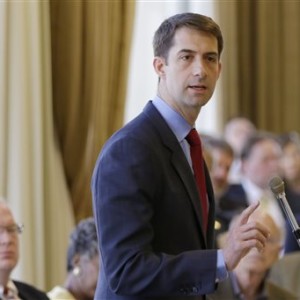 “I respect Tom Cotton on a lot of his policies,” the group’s spokesman Jorge Marin told InsideSources in an interview. “I respect him on a lot of his tax policies. But I think, on this issue, we do differ. … He’s following the same failed policies of the past.”

But Marin, whose group is part of a broad coalition across the ideological system that backs the criminal justice changes, said Cotton’s state is one of many across the country where conservatives have led reform. They’ve embraced the issue as a means of saving money, promoting public safety and, consistent with their philosophical commitments, limiting the role of the state. “In a sense, we’re almost opening up a new frontier in the fight against an overreaching government,” Marin said.

Americans for Tax Reform is allied with seven other prominent interest groups on this issue, organized by the U.S. Justice Action Network: FreedomWorks, the American Civil Liberties Union, the Leadership Conference on Civil and Human Rights, Right on Crime, the Center for American Progress, the Faith and Freedom Coalition and the NAACP.

Former NAACP president Ben Jealous told the Center for American Progress in October that progressives “have been catching up with conservatives” on criminal justice reform, and Justice Action Network deputy director Jenna Moll echoed that sentiment in an interview. “Conservatives began working on this issue more than a decade ago,” she said, noting that current supporters on Capitol Hill include Speaker of the House Paul Ryan, Virginia Rep. Bob Goodlatte and Iowa Sen. Chuck Grassley, Republicans all.

Marin said many in the GOP moved from their traditional “tough on crime” postures after successful reforms at the state level, citing Texas and Georgia as examples. “If it wasn’t for those two states, we wouldn’t be having this conversation,” he said.

Part of the dynamic is that Americans are more connected to the criminal justice system than ever before, including through viral videos of police interactions. “It’s just becoming a much more glaring issue out in the public,” said Jordyn Bussey, a Leadership Conference organizer. “I don’t think it can be ignored anymore.”

In addition to sentencing reform, Bussey said her group is focused on issues such as civil asset forfeiture and “banning the box” — an effort to prevent employers from asking job applicants about their criminal records early in the application process.