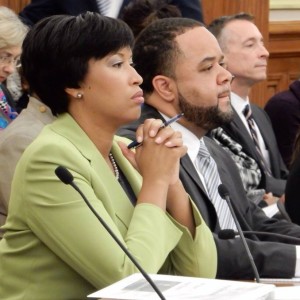 D.C. Mayor Muriel Bowser, left, appears before the D.C. Council in April. (Photo: the Council of the District of Columbia)
News

D.C. Mayor Muriel Bowser’s administration says it’s attempting to create “one of the most transparent systems in the country” when it comes to police body cameras and the video they produce. But open government advocates said Wednesday that Bowser’s plan for these cameras, expected to be operating across the District within a year, would actually undermine transparency and stifle public access to footage.

Appearing before the D.C. Council, representatives of the D.C. Open Government Coalition, the American Civil Liberties Union of the Nation’s Capital, and several journalism advocacy groups criticized the mayor’s proposed rules for what kind of video would be made available through the Freedom of Information Act — and how quickly that video would be released.

Bowser wants to give police up to 45 days to comply with FOIA requests, as opposed to the 15 they currently have for public documents.

Plus, as WAMU reported, “All footage taken inside a home or other places where privacy is expected — like a hospital or social service facility — would be exempted from release to the public, as would any footage related to incidents involving domestic violence, stalking, sexual assault — or any type of assault.”

None of this went over well Wednesday.

“Police need to be accountable to citizens in private settings as well as public ones,” said Rebecca Snyder of the Maryland-Delaware-DC Press Association.

The advocates argued that current law provides sufficient protections for victims’ rights and citizen privacy, so there should be no changes to the FOIA policy. Snyder said, “It’s already, from a press standpoint, difficult to get information and to get documents of public record, and we don’t want to add to that burden as the press plays its traditional watchdog role.”

Bowser’s proposal to exempt footage of any type of assault drew the most criticism, with advocates who had been consulted by the mayor earlier in the year saying she made no mention of that plan. A frustrated Adam Marshall from the Reporters Committee for Freedom of the Press said advocates’ opinions “were not meaningfully incorporated into the mayor’s proposals.”

The Bowser administration responded to these concerns with testimony from Deputy Mayor for Public Safety and Justice Kevin Donahue and D.C. Police Chief Cathy Lanier.

“There is no broad national consensus on whether or how to release body-worn camera footage,” Donahue said. “We also believe that victims of certain highly personalized crimes merit protection from FOIA disclosure due to the nature of the crime and the potential of deterring future victims coming forward.”

With these victims, the deputy mayor said, there’s “a real and persistent fear of revictimization and retaliation.”

“We believe our proposal strikes a proper balance between broad public access and protecting basic privacy rights,” Donahue said in written testimony. He said the Bowser administration understands there will be instances when the public’s right to know about video footage supersedes an individual’s right to privacy. However, under Bowser’s plan, the mayor herself would get to make these determinations.