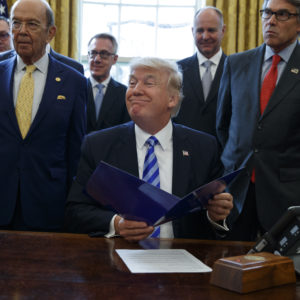 Even without any action by President Donald Trump, Friday, March 24, 2017 would have been a marked day for environmental activists. The date marks the twenty-eighth anniversary of the Exxon Valdez oil spill in Alaska. The disaster sparked new safety reforms and a renewed focus on preventing large scale spills. Today, Trump also announced the official approval of the Keystone XL pipeline, which will carry Canadian tar sands oil into the United States.

“Today I am pleased to announce the official approval of the presidential permit for the KeystoneXL pipeline,” Trump said. “TransCanada will finally be allowed to complete this long overdue project with efficiency and speed.”

When complete, the pipeline will carry oil from landlocked Alberta, Canada, to Steele City, Nebraska. There the Keystone XL pipeline will connect with a preexisting line. Previously, the pipeline route was the subject of intense controversy because sections of it ran over the Ogallala Aquifer in Nebraska, which provides water for parts of eight states, and ran through the habitat of the sandhill cranes.

TransCanada agreed to reroute the pipeline to avoid the Sands Hills region, but controversy lingered. In Nebraska, Jane Kleeb, head of the Nebraska Democratic Party, founded Bold Nebraska to push back against both the pipeline’s environmental impact and its use of eminent domain. Kleeb later expanded her movement into other states, including Louisiana, Oklahoma, and Iowa, and sent donations to Standing Rock.

Now that Keystone XL is back on the table, Kleeb is shifting her group’s focus back to Nebraska, which still needs to grant state permits for the project. In the meantime, Kleeb has spoken out about the recent approval.

“No announcement from the White House can distract from Trump’s constant lying,” she said. “Keystone XL will use foreign steel, to transport foreign oil, to the foreign export market all while using eminent domain to take land away from farmers and ranchers. Keystone XL is and always will be all risk and no reward.”

When Keystone XL was first being discussed, Kleeb worked with farmers and ranchers worried about the use of eminent domain and potential contamination of the aquifer. Today she is allying herself with environmentalist groups, including 350.org, the Natural Resources Defense Council, and the Sierra Club. Leaders from three groups participated in a press call with Kleeb on Friday. In addition, this time around, native voices have a more prominent role, reflecting the continuing influence of Standing Rock.

Activists are planning to employ the same tactics they used against the Dakota Access Pipeline, including legal challenges, protests, and attempts to convince financial institutions not to provide funding for the project. Native American environmentalists who helped to organize the #NoDAPL campaign have begun to to release statements opposing the Keystone XL pipeline as well.

Dallas Goldtooth, lead organizer for the Indigenous Environmental Network’s anti-pipeline campaign, promised that Trump should “expect far greater resistance than ever before,” as he and his allies worked to stop the pipeline a second time.

“We’ve stopped the toxic Keystone XL Pipeline once, and we will do it again,” Goldtooth said. “Indigenous nations stand united not just here in the U.S. but around the world. This fight is not over, it is just beginning.”

Activists have already begun to protest the pipeline’s construction. Marches are planned for Friday evening in both Washington, D.C. and New York City.

Billionaire environmentalist Tom Steyer, (who earned part of his fortune through investments in Russian energy), criticized Trump both for approving the pipeline and for promising that it would be built with American steel. (The pipe has in fact already been purchased. About half came from American manufacturers, with the remainder coming from mills in Canada, Italy, and India.)

“Once again, he is bowing to corporate polluters and Russian oligarchs in a deal that harms the safety, health, and prosperity of American families,” Steyer said in a statement.

Many observers predicted that a Keystone decision was forthcoming after TransCanada opted to drop a $15 billion NAFTA complaint against the U.S. earlier this week. The company had been seeking relief after it had previously been denied a permit.

“The only winner of this ‘deal’ is TransCanada, which is using a $15 billion threat under NAFTA’s deeply flawed corporate tribunal system to outmaneuver Trump and push a dirty and dangerous pipeline across our country,” said Sierra Club Executive Director Michael Brune.

However, supporters of energy development and the construction industry were pleased with the new development. It is estimated that the pipeline would create 3,900 construction jobs if built in one year and about 1,950 jobs if construction takes two years. According to State Department estimates from 2015, an additional 16,100 jobs would be created through firms awarded various contracts for the project.

“This is a significant milestone for the Keystone XL project,” said Russ Girling, TransCanada’s president and chief executive. “We greatly appreciate President Trump’s administration for reviewing and approving this important initiative, and we look forward to working with them as we continue to invest in and strengthen North America’s energy infrastructure.”