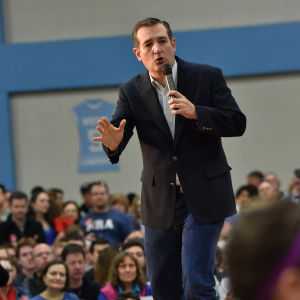 Most voters are likely confused when they hear the GOP presidential frontrunners, Donald Trump and Ted Cruz, explain their plans for Common Core. Both tap into populist anger with the education standards. Trump states, “We’re getting rid of Common Core.” Cruz offers a clear policy prescription: “In the first days as president, I will direct the Department of Education that Common Core ends that day.”

The problem for the two Republicans is that neither has any authority as president to end Common Core. The Republican-controlled Congress recently passed the Every Student Succeeds Act that explicitly forbids federal involvement in state standards, which is what Trump and Cruz are suggesting. If they did act to stop Common Core, it would also violate every principle the GOP has held on the education front for decades because Common Core is not a federal policy.

Common Core State Standards, which cover only math and English, were created at the state level by governors and school administrators. Initially, 45 states adopted the standards. For Trump or Cruz to force those states to reject the standards would therefore give the federal government a new muscular role in determining what is taught in each state.

Beyond the legal challenges, adopting non-Common Core standards has proven problematic in several states. Indiana, South Carolina, and Oklahoma all adopted the Common Core State Standards but later repealed them in response to political pressure. The three states present case studies in what may happen if Trump and Cruz successfully passed a federal prohibition of Common Core.

Indiana and South Carolina have attempted to replace Common Core with their own standards, but those efforts have essentially reverted back to Common Core. Jordan Ellenberg, a math professor at the University of Wisconsin, explained in the New York Times last year that the oft-criticized Common Core math standards are difficult to rewrite because they generally match up with what we all expect students to learn in math classes. “The South Carolina Education Oversight Committee found that the new South Carolina math standards were 92 percent in alignment with the content of the Common Core. In other words, the math they’re asking students to learn is largely the same.”

As Ellenberg points out, even the “making 10” math strategy that faces so much criticism in online social media is still in the Indiana standards. And although Texas declined to pass Common Core, and Texas Gov. Greg Abbott has taken to TV to criticize “making 10,” the strategy is still present in Texas’ own state standards.

Oklahoma attempted a different strategy than Indiana and South Carolina’s close alignment with Common Core. The state wrote completely new standards that have few similarities to Common Core. But the new standards, set to be approved Monday, have bridged the chasm between both critics and supporters of Common Core. The universal response seems to be that Oklahoma’s standards are a disaster.

Dr. Lawrence Gray, a professor of mathematics at the University of Minnesota, was involved drafting math standards in the North Star State. Oklahoma asked for his guidance in reviewing its new standards. While Oklahoma’s Department of Education cited him as a reviewer, he tells InsideSources the state took no interest in his objections and the “dozens of flawed items” he identified in the math section.

Gray performed a detailed review with a team he assembled to examine the final version of Oklahoma’s new standards. He says, “We were dismayed to find that roughly 20% of the items in that document needed serious attention because they exhibited the same kind of flaws I had seen in the earlier draft.”

On the topic of money for grades K-4, explains Gray, Oklahoma’s standards slow progression to end in fourth grade with students still unable to calculate anything other than whole dollar amounts under $20 or coins without bills. Meanwhile, Minnesotan fourth graders are expected to be able to handle real-world money scenarios.

Sandra Stotsky, professor emerita in the department of education reform at the University of Arkansas and a frequent critic of Common Core, tells InsideSources, “These proposed standards will make Oklahoma’s students less competitive than they now are.” She continues: “They know there is nothing in these standards to create critical thinking skills or deeper thinking. They may tell you the opposite, but they can’t show you one standard that will challenge any student because we have no idea what they would be reading in grade 11 or could. They certainly won’t learn about Oklahoma’s significant writers, leaders, or historical events.” Stotsky provided a detailed critique to the state legislature.

Achieve writes in its report that the “standards will likely cause confusion for Oklahoma’s teachers because they aren’t sufficiently clear, specific, and/or consistent enough to guide their teaching.” The report, which offers a side-by-side comparison with how the standards differ with Common Core, suggests that Oklahoma’s standards will set up students for difficulty in college. “[T]he standards will fail to adequately prepare Oklahoma students for postsecondary success because they don’t insist that they read texts of sufficient complexity, nor consistently or adequately call on them to make arguments drawn on evidence in the texts.”

The report concludes: “Worst of all, these standards will disadvantage Oklahoma students compared to their peers in other states; students in Oklahoma will be less prepared to successfully enter college and careers.”

Oklahoma’s failure and the close alignment of Indiana and South Carolina to Common Core likely offer new insight should states be considering writing their own standards or confront federal action from a president Trump or Cruz.

“The lesson here is that it’s hard to write good standards, which is why most states failed to do so before Common Core,” says Michael J. Petrilli, a Common Core supporter and president of the Washington-based, right-leaning Fordham Institute. “And it’s impossible to write strong, college-and-career ready standards that look nothing like the Common Core. Because the Common Core represent a good-faith effort to identify the knowledge and skills students need in order to be ready for what’s next.”