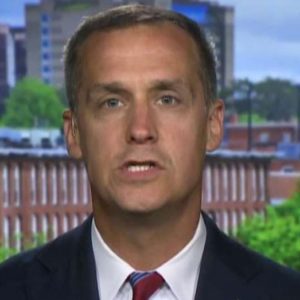 A poll taken by one of President Donald Trump’s top pollsters gives the president’s former campaign manager Corey Lewandowski a solid lead over the other two Republicans in a potential GOP primary for the U.S. Senate, a new report says.

“The survey of 400 likely primary voters was conducted Aug. 11-12 by Tony Fabrizio, who separately serves as a top pollster on the president’s reelection campaign,” according to Politico. Lewandowski had 30 percent support, while retired U.S. Army General Donald Bolduc had 11 percent and former N.H. House Speaker Bill O’Brien was at 10 percent.

Some NHGOP pros believe it’s significant that Trump’s pollster conducted the survey, a connection boosting the widespread belief that Trump is going to endorse a Lewandowski candidacy when he comes to Manchester for a rally on Thursday.

The poll was conducted on behalf of Lewandowski ally David Bossie of the conservative group Citizens United, who told the magazine he hoped it would encourage the outspoken politico to enter the race.

“I hope this poll educates Corey as to where he stands in New Hampshire, and I think the president knows that he has no greater ally than Corey Lewandowski,” Bossie said. “I would expect he would fully endorse Corey if and when he gets in the race.”

Lewandowski got the message, tweeting: “Wow! Amazing! This poll gives me more to think about as I consider how best to serve the people of NH and ⁦@realDonaldTrump⁩. Thanks ⁦@David_Bossie⁩.”

New Hampshire Republican strategists agree that Lewandowski would enter the primary as the presumptive front-runner due to his relationship with the president. “This was always going to be the ‘Trump’ primary,” one NHGOP campaign veteran told NHJournal. “And nobody’s going to be able to ‘out-Trump’ Corey.”

“The first thing that jumps out at me is his high name recognition and 2.5 to 1 positive image.  If those numbers are real, then the other candidates should close up shop and endorse Lewandowski as the Republican nominee.  It’s one thing for Lewandowski, the Trump candidate, to start at the same level as the other candidates. But add name recognition and image on top, and it becomes an almost insurmountable prospect for Bolduc or O’Brien.”

Both Bolduc and O’Brien have announced their support for President Trump and both insist they are prepared to take on Lewandowski.

“Here’s the reality. Come November 2020, General Don Bolduc provides — by far — the best opportunity for New Hampshire voters to replace lethargy with leadership in the U.S. Senate. When it’s all said and done, New Hampshire voters will choose the person who will best represent and defend the interests of the Granite State. General Don Bolduc has both the character and experience to do what must be done. We need to get this right.”

One of Trump’s earliest supporters in New Hampshire, Windham Selectman Bruce Breton, is a friend of Lewandowski and tells NHJournal that Granite State Republicans are excited about his candidacy. “I was just at a GOP event, and everyone was telling me ‘Bruce, please tell Corey to run!’ One person told me ‘I’m praying Corey will get in the race.'”

Not everyone is a fan, however. Former U.S. Senator Judd Gregg, a New Hampshire Republican, described Lewandowski as a “thug” in a recent NHJournal interview and said his nomination by the NHGOP would be “an outrage.”

For the moment, the numbers appear to favor Lewandowski.

“Corey Lewandowski would enter the race as the GOP front-runner — leading the field by double digits due to his stronger personal ratings. He could clearly see his lead expand even further with an endorsement from President Trump, who is extremely popular with these GOP voters,” Fabrizio said in a memo obtained by POLITICO.