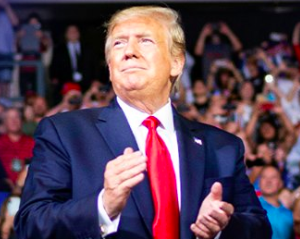 Trump: ‘We Will Win the Great State of New Mexico’

President Donald Trump spoke Monday to a boisterous crowd of thousands at a rally in an Albuquerque suburb, courting New Mexico’s Hispanics and vowing to protect the state’s booming oil and gas industry against Democrats who want to eliminate U.S. use of fossil fuels. It was his first visit to New Mexico as president — and according to his campaign, a first step toward taking the Land of Enchantment in the 2020 election.

“We will campaign for every vote and we will win the great state of New Mexico,” Trump said at the packed Rio Rancho gathering. “For whatever reason, it’s been quite a while since a Republican won this state, but I think we’re going to win this state.

Nearly half of New Mexico’s population is Hispanic and the president made it clear he is in full support of those who came to the U.S. — legally.

After touting the low unemployment rate for Hispanic Americans, Trump said, “We’re working night and day to deliver a future of limitless opportunity for our nation’s Hispanic American citizens, including many extraordinary Mexican Americans.”

The last Republican to win New Mexico was President George W. Bush in 2004.  New Mexico leans heavily progressive Democratic — both on the state and federal levels — and the majority of the state’s voters do as well.  The latest Morning Consult poll puts Trump’s puts Trump underwater among New Mexico voters by -17 points (40 percent approve/57 percent disapprove).

But the Trump campaign is still convinced he can carry the state thanks to the flourishing oil and gas economy; his work for border control and a wall to protect New Mexican ranchers; and the large number of Hispanics who support his pro-life and pro-gun policies.

“In 2020, our New Mexico Trump Victory leadership team will deliver the state of New Mexico for President Trump and Republicans up and down the ballot,” said Trump campaign manager Brad Parscale and RNC Chairwoman Ronna McDaniel, in a joint statement hours before the rally.

“President Trump has succeeded overwhelmingly for the men and women of New Mexico, reversing the disastrous Obama economy and reducing the unemployment rate by more than a point and a half,” the statement said. “President Trump’s successes will propel him to victory as our impressive leadership team wins the state for the President and all Republicans on the ticket.”

New Mexico Republican Party Chairman Steve Pearce, who first told InsideSources in June that he believed Trump could win the state, said people who might not have trusted Trump and his promises in 2016 have had a change in outlook.

“I think people are looking at their paychecks and they are seeing higher pay… and secondly the lower taxes,” Pearce told InsideSources. “It may not mean anything to people in Washington to get $200 or $300 more [in tax relief], but in New Mexico it is tremendously important.

Pearce said New Mexico has been designated a target state and “That means that money is going to be spent… and we will be getting resources both in money and attention and that’s what causes campaigns to thrive.”

The former congressman said there was a clear difference between how New Mexicans viewed Trump in 2016 and now.

“The economy here was flat. And [New Mexicans] were told the tax cuts were not going to work, that the economy was going to get worse — and so people believed it,” he said.

Pearce also noted the importance of Hispanics, who “are very conservative but they also want to know that the person running as a Republican will care about them.”

“In 2016, they didn’t necessarily believe that about Trump,” he said. “Now they can see that the economy is good and they see their taxes are down… the Hispanic population is [also] heavily in favor of gun rights.”

“The pro-life issue is very important to Hispanics here in New Mexico, so I think the mood is very much flowing in the president’s direction.”

However, longtime New Mexico political observer Brian Sanderoff said he believed it was an “uphill battle for Trump to win in New Mexico.”

Sanderoff, the president of Albuquerque-based Research & Polling Inc., has not done any polling of his own, but noted Republicans have lost the last few presidential elections in the state.

“The last three presidential elections, two with Obama, one with Hillary Clinton, the Democrats won by very comfortable margins — about 15 points, about 10 points and about eight points,” Sanderoff told InsideSources.

“The Trump people think they might have a chance at getting the 10 percentage points that [former New Mexico governor] Gary Johnson received in the most recent election and that would close the gap,” he said. “Gary Johnson did pick up some Hispanic support and that would be a target for the Trump folks.”