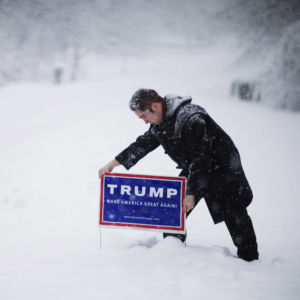 James Radcliffe, a volunteer for Republican presidential candidate Donald Trump, places a sign outside a home while walking through the snow knocking on doors in search of Trump supporters Friday, Feb. 5, 2016, in Londonderry, N.H. The twenty-two year old, from out-of-state whose never been involved in politics, is on the front lines of Trumps ground war in New Hampshire, where the billionaire businessman is under intense pressure to win big. (AP Photo/David Goldman)
News

Could There Be a Legal Battle if Towns Postpone Tuesday’s Elections?

Monday was supposed to be the calm before the storm, but in New Hampshire politics, the day was muddled with confusion over the legality of towns’ rights to postpone Tuesday’s elections due to the impending blizzard.

The day started with Secretary of State William Gardner saying, “We don’t have snow days in the law for elections.”

Yet, town officials throughout the state were taking matters into their own hands and postponing the annual “second Tuesday in March” elections for later in the week after the snowstorm subsided. Reasons for postponement were mostly due to ensuring the safety of residents and first responders from hazardous road conditions. Some parts of the state are expected to receive between 10 to 20 inches on Tuesday.

The secretary of state’s office maintained its position that by state law, towns are required to hold elections regardless of the snow and expected blizzard conditions. If they don’t, there could be legal consequences. Town officials say a different state law allows them to change the day of the election in an emergency situation.

“I don’t know what the consequences will be,” Paula Penney, elections assistant at the secretary of state’s office, told The Portsmouth Herald. “If they don’t have the election tomorrow, it may end up in superior court. But I don’t know what’s going to happen. I don’t have any indication that (the office’s) position will change.”

The two laws in question are RSA 669:1 and 40:4. RSA 669:1 is the law the secretary of state’s office was citing as requiring towns to hold the election, regardless of the snow. The law states:

RSA 40:4 is cited by the towns for giving them the flexibility to change the date of election in the event of an emergency. This law states:

“In the event a weather emergency occurs on or before the date of a deliberative session or voting day of a meeting in a town, which the moderator reasonably believes may cause the roads to be hazardous or unsafe, the moderator may, up to 2 hours prior to the scheduled session, postpone and reschedule the deliberative session or voting day of the meeting to another reasonable date, place, and time certain.”

So which interpretation is right? Some legal experts said it’s not exactly clear if that law refers to voting for races in elections or voting for budget and other town issues at traditional town hall meetings.

John Greabe, a law professor at the University of New Hampshire, told NH Journal that the specific rule would “govern over” the general rule.

“It’s not uncommon for there to be two statutes that seem to be at odds with each other,” he said. “It’s a traditional approach to the conflict of laws where there is a more specific rule and a more general rule. It’s common for courts to go with the more specific rule.”

“I don’t think there is any inconsistency in the law,” he told NH Journal. “We believe it’s very clear that they [towns] could move the election.”

He mentioned that a group of municipal lawyers on a list-serv “overwhelmingly” agreed that the moderator has the clear authority to reschedule the election.

With significant confusion surrounding the issue, Gov. Chris Sununu weighed in on debate. He spoke with municipal leaders and Attorney General Joe Foster in a Monday afternoon conference call encouraging them to hold elections, but said the state would not mandate them to do it.

“It’s our understanding that a lot of towns have already made a choice to postpone their elections,” he told reporters. “There are some differing opinions at the state level as to whether that is a valid process for them to take. The best we can do is to strongly recommend that all towns stay open for voting tomorrow. We think that’s a very important part of the process. But given the differing opinions, I don’t think we’re in a position to mandate that towns stay open or change their direction if they choose not to.”

Sununu cautioned town officials that if they postpone Tuesday’s elections, they are doing so “at their risk,” suggesting the town could be open to lawsuits for voter suppression.

“It would create a lot of confusion if one town voted on a school issue and another town did not, and you get into an issue of do you release the results and how is that processed,” he said. “You never want someone to have their vote suppressed, or have someone not be able to participate in the process because of confusion at the local level.”

Johnston said he interpreted Sununu’s message that “the state would not challenge a town’s decision to reschedule,” but an individual voter could.

“What I imagine could happen, although unlikely, a voter who is not happy about how things played out, would go to court and claim that the moderator violated his or her authority in rescheduling the vote,” he said. “But because the law is really clear, I don’t think the challenge will go that far.”

In order to make the interpretation very clear, and to avoid confusion like this in the future, New Hampshire Democratic leaders are planning to introduce emergency legislation this week to ensure that results from any town elections postponed due to snow are enforceable.

“As elected officials, we have a solemn duty to ensure the safety of our citizens and no election should require voters to risk their safety in order to participate. Our election workers and town moderators are well-trained and take the task of facilitating transparent and fair elections seriously. We should trust them to make the best decision for their communities and for the safety of their people. That’s why we will attempt to introduce emergency legislation at this week’s Senate Rules Committee meeting to ensure that results from any elections postponed due to public safety concerns are enforceable and so that our local officials can make the right decision for their communities without fear of a legal challenge.”

Sununu agreed that the Legislature should take action to resolve the conflicts in state law, but it’s unclear if he will support the Democrats’ bill when it is introduced.

Is your local election and town meeting postponed? Check out the rolling list here as town officials make the decision.