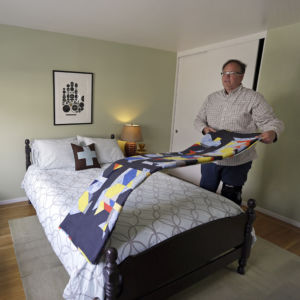 In this Friday, Oct. 16, 2015, photo, Bruce Bennett folds a blanket in a room that he makes available to rent in his home in San Francisco. Bennett and his husband, Lawrence Gordon, have been renting out one of their three bedrooms in a 1957 midcentury modern in the Sunnyside neighborhood since February 2014. Travelers worldwide love using Airbnb to book vacation stays in San Francisco but some in the city where the company was founded are decidedly less affectionate, backing a Nov. 3 ballot measure that would limit how long a private home can be rented out. (AP Photo/Ben Margot)
News

Union and Hotels Push Restrictions of Airbnb in Austin and Chicago

When New York passed legislation last month placing new regulations on Airbnb and other homesharing platforms, supporters of the law spoke of rising rent prices and illegal listings. A closer look, however, revealed that the issue was more complicated: Gov. Andrew Cuomo and other supporters of the bill received campaign contributions from unions and trade groups hostile to the company. While union ties are strongest in New York, pushes to restrict homesharing in both Chicago and Austin also show the influence of real estate developers, industry groups, and unions.

In June, Chicago passed a complex legislation package that restricts how many units can be listed per building, attaches various taxes and fees to listings, and allows individual precincts to gather signatures to ban homesharing altogether.

The new law came after a strong public push by local and national hotel associations. But the industry push to restrict Airbnb’s access to the market wasn’t limited to reports analyzing “the other side of Airbnb.” Both hospitality groups and unions donated large sums to Chicago Mayor Rahm Emanuel and city aldermen

The bulk of the contributions came from the Illinois Hotel & Motel Political Action Committee (IHMPAC), which has donated some $65,000 to “Chicago for Rahm Emanuel,” a group supporting the mayor’s reelection campaign. This includes a $25,000 contribution made in September.

The IHMPAC describes its goal as “to financially support elected officials and candidates who promote legislation and regulation that creates a business environment in Illinois which allows the hotel industry to operate successfully.” The group’s members generally view Airbnb and similar companies as intruding on their business market.

In addition to donations to the mayoral campaign, IHMPAC has supported several city alderman who spoke out strongly against homesharing. Alderman Brendan Reilly pushed this summer for the city to reconsider its preexisting laws on homesharing and painted a picture of “the transiency, the keg parties, the loud noise, destruction of property, total disregard for the neighbors,” that Airbnb brought in its wake.

“The city should focus more effort and attention on enforcing that law before revising it to essentially unleash Airbnb to potentially wreak havoc on the quality of life in neighborhoods across Chicago,” Reilly told the Chicago Sun-Times.

So far, irate Chicago citizens have not appeared to demand Airbnb leave. However, campaign finance documents reveal that Reilly has received nearly $28,000 in contributions from the hospitality group between April 2007 and May 2016.

Among the organization’s other top recipients was Alderman Joseph A. Moore. Moore co-sponsored legislation requiring both hosts and companies facilitating booking transactions to be licensed by the city.

And this summer, Moore also received donations from IHMPAC. While the industry group’s contribution was negligible, Moore received additional money from organized labor. The largest single donor to his candidate committee, “Citizens for Joe Moore,” was the Service Employees International Union, which donated $143,000. While the Washington Post reported this spring that Airbnb and the SEIU were close to cutting a deal to employ unionized home cleaners, the agreement eventually fell through.

And Chicago was not the first city to move restrict homesharing in 2016.

In February, Austin, Texas went further, passing legislation that regulated short-term rentals in residential areas when the owner was not present, essentially targeting the classic Airbnb set up of renting out one’s home while on vacation. Under the new law, these short-term rentals, classified under local ordinance as a “Type 2 STR,” will be completely banned by April 1, 2022.

The law affects not only Airbnb, but also HomeAway, a locally-based company owned by Expedia. While supporters of the law, such as Councilmember Kathy Tovo, told horror stories of apartments being turned into “mini hotels 100 percent of the time,” one local foundation has already filed a lawsuit challenging the regulation, which it called “a solution in search of a problem.”

Days after the passage of the new law, a new company appeared on the scene, ready to help landlords and neighbors crack down on illegal rentals with a product called “BNB Shield.” The site trolls listings on Airbnb, Homeaway, and other sites, informing apartment complexes, condominium association, landlords, and neighbors of illegal sublets, which the company’s website claims “have been linked to drugs, bed bugs, prostitution, pornography and other crimes.”

The company describes itself as an accountability service, meaning, as one company founder put it, “if you’re playing the game correctly, then everybody gets to play.”

It’s a strange statement, since the company’s president, Jordan French, has been linked to questionable business practices in Austin for years. French was sued in 2015 for having a local piñata store demolished overnight even though the business had a lease through 2017 and was not delinquent. Facing a lawsuit from the piñata store and public pressure, French later resigned as CEO of the unrelated firm.

Like Uber, homesharing threatens a well-established industry. While consumers support the broader availability of affordable rental options, traditional hospitality groups including unions and hotels are putting political pressure on lawmakers to slow the industry’s growth.