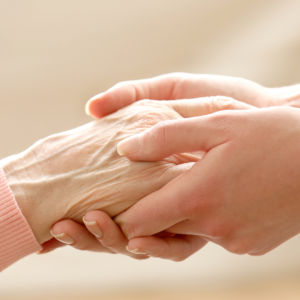 Medicaid subsidized caregivers have been speaking out against a practice that places them in unions who then collect a portion of those funds. InsideSources spoke to some of them to hear their stories.

Lawmakers in several states have passed laws that allow unions to organize personal caregivers as one collective bargaining unit. But the practice has faced backlash from critics who see it as a way to help unions siphon off government funds meant to help the elderly and disabled – calling it “dues skimming.”

The caregivers collect the funds so that they can help people in need on a personal basis. They are often related to their client. Those states that allow unions to organize caregivers have passed legislation that classifies them as public employees but only for the purpose of collective bargaining.

Minnesota is one such state that has passed a law allowing for the practice. Hollee Hembree recalls when she first started hearing about the possibility of being unionized back when she worked as a personal care provider in the state. She thought it sounded like a good idea at first when the union started reaching out around 2014.

“I said yes, that sounds like it would be cool,” Hembree told InsideSources. “And that’s where we started having problems because I had a lot of questions but did not receive a lot of likable answers. I was already making as much as I could and I did not see a whole lot of benefit to them, at least for me.”

Hembree became a personal care provider after learning that her best friend’s mother had become ill. She was working her way up to become a registered nurse at the time but decided to help her friend’s mom instead. Democratic Gov. Mark Dayton eventually signed a law allowing unions to organize caregivers in 2013.

The Service Employees International Union (SEIU) and the American Federation of State, County and Municipal Employees (AFSCME) have been singled out by critics as being the main unions behind the policy nationally. SEIU Healthcare Minnesota unionized the care providers in that state a year after the law was passed.

“At some point, I told them all that I was going to vote no,” Hembree said. “I never heard back from anyone and before I knew it the union had passed and I noticed unions dues were being taken out because I was refinancing my house at that time and they needed stubs. And the person helping me refinance asked about the dues and that’s how it was brought to my attention.”

Hembree was surprised when dues were being taken out because she already expressed that she didn’t support the union. She wasn’t made aware that she was automatically enrolled and had to opt-out. But when she tried to follow the steps to leave, she says, the union ignored her.

“I had followed those steps and talked with someone several times without any results,” Hembree said. “So I started sending email correspondences saying to whom it may concern, dues are being taken out and I don’t want any part of it. When nothing happened I forwarded the emails to my employer.”

Hembree was eventually able to stop paying dues but not without a struggle. The U.S. Supreme Court ruled that personal caregivers can’t be forced to pay dues because they weren’t technically state employees during the 2014 case Harris v. Quinn. But unions have still been able to implement policies that make it difficult to leave.

Hembree isn’t alone in her opposition to the union practice with similar policies being implemented in states like California, Washington, Oregon, Massachusetts, Vermont, and Connecticut. Miranda Thorpe went to court to challenge the version of the law passed in Washington.

“I only discovered it after becoming an individual care provider for my daughter,” Thorpe told InsideSources. “That was about three years ago when she turned 18. Long story, I went to training and registration. They make you go to this meeting where you fill out all the paperwork. And I knew unions dues are an issue and they could probably take them unless I said something.”

Thorpe asked during the meeting whether there was a way not be pay dues. She was directed to a website that provides people with information on how to opt-out. The Freedom Foundation, a Washington state based free-market think tank, setup the website as part of its continued fight against the practice.

“I just went about my businesses and about two or three months later I realized they were still taking dues out of my paycheck,” Thorpe said. “So I actually heard from a lady at the Freedom Foundation and called them and asked whether this was right when I didn’t even sign the union card and they said no, not at all.”

The Freedom Foundation has since been assisting in her legal challenge against automatic dues deductions. The lawsuit asks the court to outlaw collective bargaining agreements that direct the state to seize union dues from providers who did not first authorize it in writing.

“So I wrote a letter to the SEIU and said stop doing this and they did,” Thorpe said. “From there we had a court case at the state Supreme Court in Olympia and tried to argue that this opt-out scheme was illegal, and we did not win that case.”

Thorpe adds most care providers she knows have no idea dues are being deducted from their paycheck. Those that do figure out dues are being taken out, she notes, have difficulty leaving the union. She believes that the issue is especially bad considering federal funds meant to help people in need are instead going to unions.

Thorpe argues that unions who are doing a good job shouldn’t have any difficulty getting people to join voluntarily. The issue, for her and other critics, is that caregivers have to opt-out while unions deploy tactics that discourage them from leaving. She adds that unions also spend a lot of those funds on political causes.

“I think that the state colludes with them,” Thorpe said. “The state sets up these meetings. They passed a bill that says unions are allowed 30 minutes, uninterrupted, with the new hires. They put them in a room and lock the doors and the state can’t come in and talk to them until the union is finished talking. To me that’s collusion. The state has no business being that tight with the union.”

The State Policy Network (SPN) is another group that has been closely following the union practice while working with caregivers who feel that they have been forced into the system. SPN has released research which purports to show that unions take $200 million annually from Medicaid funds through personal caregivers.

Those in support of the policy have argued that union representation can help the caregivers gain a voice so that they can advocate for themselves and their clients. The SEIU Healthcare Minnesota argued that unions can help caregivers fight for better wages, benefits, and care when working to unionize them in 2014.

Minnesota PCAs was launched in response to accusations that union engaged in widespread fraud and potential collusion with the state government when it successfully organized 27,000 care providers. The coalition of worker choice advocates has since launched a legal challenge while also working to help disfranchised care providers.

Patricia Johansen joined the challenge when she came to believe the union forged her signature in order to deduct dues from her. She was working as a personal care provider to help her grandchildren at the time. The union began petitioning her to join around 2014. She decided that the union wasn’t for her so she declined.

“At the time I was probably 75 years old, I thought I don’t want to join the union, and I had no reason to,” Johansen told InsideSources. “I’m really just doing this to help my daughter. She had foster kids for quite a few years, then she adopted three of them, and they were all special needs so she really needed help with them.”

Johansen was surprised to learn that dues were being deducted from her paycheck. She called the union who informed her that she must have signed a membership card. The union conceded there was a possibility her signature was forged and refunded her dues – though their internal investigation found it was inconclusive.

Johansen adds it was hard to find anyone that could help her at first. Minnesota PCAs eventually came in to assist her as part of their ongoing campaign against the state law. She submitted an affidavit to the state last year stating that she believed the union forged her signature in order to deduct dues.

“What they stated was that they did an investigation, it was the union representatives and their lawyers, and they thought it was inconclusive,” Johansen said. “They looked at it, they knew it was a forgery, and yet, I suppose, they couldn’t admit it because they would get in trouble.”

Labor unions have been known to deploy tactics that make it more difficult for workers to opt-out. Nowhere in the country can a worker be forced to join a union, but in many states, unions can require nonmembers to pay a nonpolitical fee. States with right-to-work laws forbid all mandatory union payments. Additionally, the Supreme Court ruled personal caregivers can’t be required to make any payments once they become nonmembers.

“From what I am to understand there is some kind of process and paperwork you have to fill out,” a caregiver who wished to remain unnamed told InsideSources. “I don’t remember how much but they’re taking a hundred or some dollars a year out of our policy. Honestly, I just let it go and didn’t do anything with it. So, as far as I know, they are still taking out dues.”

Tactics to keep workers in the union aren’t unique to caregivers, with similar practices being used in other sectors. A common method uses what are known as opt-out windows. Workers in those unions can only opt-out during certain times of the year. Sometimes there is a lot of paperwork involved or information isn’t readily available to workers.

“We’re just busy almost every minute of every day,” the unnamed caregiver said. “Besides tons of clinical appointments, I just haven’t had time to sit down and look all this over and jump through their hoop to cancel with them.”

Republican Rep. Cathy McMorris Rodgers, one of the top officials in the House GOP, recently said that she plans on introducing legislation intended to stop union dues skimming.