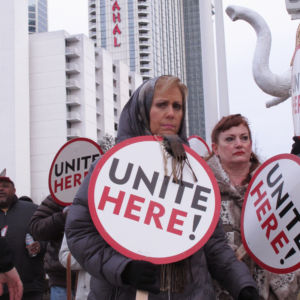 A national hotel union came to the defense of one of its local affiliates in response to a watchdog group launching an opposition campaign against it.

Unite Here Local 11 became the subject of the opposition campaign over allegations it deploys disruptive tactics to advance a self-interested and harmful agenda. The Los Angeles County-based hotel workers union responded by dismissing the group behind the campaign as an extreme right-wing organization with an anti-worker agenda.

The Unite Here national offices soon came to the defense of its local union affiliate – which represents roughly 23,000 members across California and Arizona. Unite Here spokeswoman Rachel Gumpert argues the opposition campaign is merely pushing an anti-worker agenda on behalf of donors.

“I just want everyone to know this is a troublesome group from Washington D.C.,” Gumpert told InsideSources. “They know nothing about L.A., they have no investment in L.A., they know nothing about Local 11 either. I think this is a really good case of overpaid people at Berman and Co. probably getting a call from a client that has business before the city council in L.A.”

The Eyes on Local 11 campaign is looking to expose the local union for what it claims is a harmful and unpopular agenda. The campaign also launched a website intended to serve as a platform so union members and local residents can share their personal experiences with the union.

“Local 11 has very high integrity, they’re a really well respected local, they continue to deliver real results for our workers, and I don’t think they have any controversies that are being cited,” Gumpert said. “They’re being criticized instead for being an effective worker union.”

The Center for Union Facts (CUF), a union watchdog, launched the campaign in an attempt to expose the allegedly bad behavior by the local union. It is one of several research nonprofits associated with the public affairs firm Berman and Company. Gumpert argues the groups launch campaigns designed to undermine worker rights.

The CUF points to an alleged minimum wage controversy, questionable advocacy, and support for unpopular development projects as the reasons behind the campaign. It has expressed particular concern over how the union has supported hotel development projects – arguing that it will actively support or oppose new hotels based on whether they stand to benefit, even if the project is unpopular with local residents.

Gumpert counters that the union supports new hotels that are going to have high standards for workers, and that includes collective bargaining, fair wages, and nondiscrimination contract language. She suspects what’s really behind the opposition campaign are local special interests that are opposed to those principals.

“I think it’s very clear there’s some kind of developer interest in this,” Gumpert said. “It’s very apparent that there’s some kind of affiliation with a group that would oppose those basic principals in California. And until they release their funders, we won’t know who that is. I can say that development is a very profitable industry, and there’s a lot of entrenched interests that don’t want good working standards when they’re looking for permission to build.”

Local 11 was also accused by the campaign of supporting projects that were unpopular because they surpassed existing height limits – which means potentially more members.

CUF communications director Luka Ladan argues that the union is just trying to change the subject from its self-serving development agenda.

The CUF believes the local union will stop at nothing to organize hotel employees – including waking up local residents by its frequent use of bullhorns in the morning. The group argues that the union often deploys disruptive tactics which hurts tourism and local businesses. Gumpert embraces the accusations, arguing that the union fights to raise working standards for everyone.

“All of their allegations were really that they’re opposed to the union doing its primary purpose of representing workers,” Gumpert said. “I saw that one of their main complaints was that we do actions outside anti-union properties, and that’s absolutely correct. We do that. That’s a primary function of our union. The role of the union is to raise standards for all workers.”

Gumpert argues that the union isn’t anti-business either – noting that members thrive when the industry does well. But she adds that the union supports businesses that are fair and good to their workers. She notes that Local 11 has been particularly active in supporting responsible businesses.

“For us, we’re able to have more jobs created if the industry is healthy,” Gumpert said. “We’re not anti-business whatsoever. We support responsible business, we support businesses that allow for good worker standards and collective bargaining. And we work hard to promote the good businesses that we do work with.”

Gumpert notes that she isn’t worried about the campaign against its local union. The CUF and Unite Here have fought on issues in the past. She adds the advocacy efforts from the watchdog and its associated groups have been generally ineffective – and she suspects to see more of the same this time around.

“We’re certainly not worried about this,” Gumpert said. “They have made another bad website. They make many low-grade websites for a bunch of unions, and on the one about Local 11, they’re essentially criticizing us for doing our literal job, which is improving the lives of workers. And we plan to continue fighting for workers.”

The Eyes on Local 11 campaign also took issue with the seemingly hypocritical way the local advocated for a minimum wage increase. Local 11 was alongside a handful of other unions who reportedly fought for an exemption when the Los Angeles City Council voted to raise the minimum wage for hotel workers to $15 an hour in 2014.

Those opposed to the exemption saw it as underhandedly making union labor more desirable to employers. Those workers could potentially be hired for below the minimum wage so long as their union contract allowed it. Labor unions have pushed similar exemptions elsewhere.