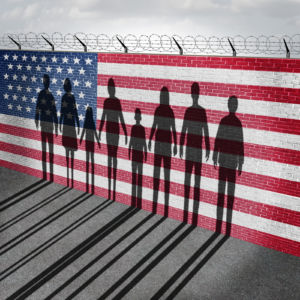 Advocates Help Sue to Save Immigrants With Protected Statuses

President Donald Trump’s administration was sued with the help of unions and advocates Monday for reining in a program that helps displaced immigrants by granting them legal status.

The American Civil Liberties Union of Southern California, Unite Here, the International Union of Painters and Allied Trades, the National TPS Alliance, and others are assisting in the lawsuit as part of a larger coalition. The groups are hoping to save hundreds of thousands of immigrants who will soon lose legal status under the Temporary Protected Status (TPS) program. The lawsuit was filed by a group of immigrants within the program including Wilna Destin.

“UNITE HERE has a long tradition of fighting for civil rights and racial justice for all workers, and we’re deeply moved by the courage of our plaintiff, Wilna Destin,” Unite Here said in a statement provided to InsideSources. “Wilna is a Haitian TPS recipient in Orlando, Florida, and her daughter who is also a plaintiff is among the 200,000 American citizens who will lose one or more parents if the current TPS terminations are not reversed.”

President Trump has made immigration a critical piece of his agenda with his promise to prioritize domestic workers over their foreign competitors. The TPS program has become one of the targets of the administration with its decision to roll back the legal status of immigrants from four countries.

“Wilna has spent 18 years building a life in this country, working at Disney and then dedicating her life to worker justice as an organizer,” Unite Here said. “She and her husband own a home, and she exemplifies the best of the American dream. We applaud Wilna’s courage and are committed to further utilizing the labor movement as a conscious for all working families under the immoral and illegal actions of the Trump administration.”

The TPS program allows foreign nationals to stay in the country legally if they are unable to return to their home country safely. The DHS has started to terminate the protected status for Salvadorans, Sudanese, Nicaraguan, and Haitian immigrants. The DHS is hoping to allow for an orderly transition by delaying the terminations by a couple of years.

The lawsuit challenges the legality of the terminations in a few key ways. It alleges that the administration violated the equal protection guarantees under the Fifth Amendment’s Due Process Clause. It also asserts that terminations violate the Administrative Procedure Act and the due process rights of United States citizen children of TPS holders.

“As a result of DHS’s unlawful actions, over 200,000 individuals—many of whom have lived in the United States for decades—face imminent loss of their right to live and work lawfully in this country,” the lawsuit, which was obtained by InsideSources, argued. “In addition, over 200,000 United States citizen children face an impossible choice between leaving the only home they have ever known and growing up without their mother or father.”

The lawsuit alleges that the terminations violate Fifth Amendment equal protection guarantees because they were motivated by intentional discrimination against race and national origin. It asserts the administration has explicitly focused on ejecting non-white, non-European, and non-English speaking people from the United States.

The ACLU has warned that the decisions have created devastating uncertainty for families around the country. Unite Here has been at the forefront in fighting to save these immigrants over the past year. The hotel workers union has organized protests, launched petitions, coordinated with industry groups, and met with lawmakers in its effort. The fight is also personal for the union with some of its members being caught in the rollback.

Supporters have argued that ending the protected status for these immigrants could be disastrous for families, communities, and employers. They contest that these immigrants have integrated into society and become part of their communities in the many years – sometimes decades – they have been here.

The lawsuit also claims that the terminations go against the Administrative Procedure Act because they are a sudden and unexplained departure from decades of practice and procedure. Additionally, it argues that those decisions violate the substantive due process rights of children who have parents within the program by presenting them with an impossible choice between leaving their home countries or leaving their mothers and fathers.

DHS has defended its decision to roll back the protected status of these immigrants by arguing their countries of origin are safe to return to. The TPS program is intended to provide temporary legal status when the immigrants cannot return safely. Critics have countered that some countries are still unsafe and the length of time they’ve been here means they have firm roots in their communities and the economy.

The TPS program also includes immigrants from countries like Nepal, Nicaragua, Somalia, South Sudan, Syria, and Yemen. Supporters are hoping to see the protected status of these immigrants extended until the government develops pathways for them to stay permanently.

Congressional members from both sides of the aisle have worked together in the hope of countering the decision to end the protected status for these immigrants. They introduced a bill Oct. 31 that would allow TPS migrants who arrived in the country prior to January 13, 2011, to claim legal permanent resident status.

Editor’s Note: The article originally said the unions and advocacy groups filed the lawsuit. This was changed to show they are helping the TPS recipients in their challenge.