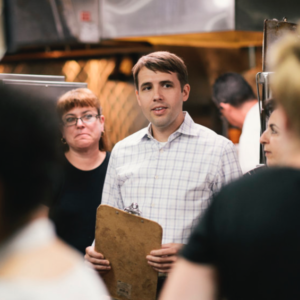 Eighteen people fell ill — and one even died — after eating at a local Manchester restaurant on the Sunday before Thanksgiving. The victims later tested positive for the contagious and potentially deadly norovirus. But, oddly, the name of the “function hall” where they ate wasn’t mentioned in the initial media report.

Is that because the restaurant in question is the Puritan Backroom, owned by the family of Democratic N.H. Congressman Chris Pappas?

From the original WMUR report:

“More than 40 people gathered for a party at a Manchester function hall the Sunday before Thanksgiving and soon after, 18 became sick with gastrointestinal issues, officials said. They later tested positive for norovirus.

“Health officials said they don’t think the outbreak was linked to the location, but they’re still trying to figure out how it happened.”

What didn’t happen is a public report identifying the location of the outbreak as the Manchester landmark known for its chicken tenders.

Documents obtained by NHJournal confirm that patrons of the Puritan Backroom reported their illness, and their belief it was contracted at the restaurant, to state authorities on November 27, three days after their gathering. Public reports came out in the press on December 5, well after the facts were known to state and local governments. And yet there was no mention of the Puritan Backroom.

And the owners of the restaurant — Rep. Pappas and his family–still haven’t made a public statement.

According to Beth Daly of the N.H. Department of Health and Human Services, the virus “could have been from a person who attended the event who was ill and then transmitted that virus from person to person.” And according to the follow-up inspection report, one of the people who fell ill to the norovirus was a member of the waitstaff.  All of which makes the outbreak something recent Puritan Backroom customers might have wanted to know about at the time.

In follow-up emails to Manchester Alderman Joseph Kelly Levasseur, Daly offered her condolences (something Pappas has thus far declined to do) and noted that the Manchester Health Department conducted the investigation, not her department. “They visited the establishment on other dates during the outbreak, but I do not have that information immediately available to me.”

NHJournal has requested more information from both departments.

Meanwhile, there’s the odd occurrence of multiple media reports about the outbreak but no mention of the name of the restaurant.  Other “function halls” (aka “restaurants”) certainly haven’t received the same courtesy. A 2015 WMUR story about a possible norovirus outbreak in Boston was headlined: “80 Boston students report getting sick after eating at Chipotle.”

The same with Pawtuckaway State Park and a cruise ship docked in Portland, Maine. In both cases, WMUR reported the location of the potential outbreak.

“If there’s a norovirus outbreak in a public place like a restaurant, it should be reported publicly and immediately,” Alderman Levasseur told NHJournal.

He also notes — and the Manchester Health Department website confirms — that the Puritan Backroom has not had a health inspection since February. Manchester restaurants are supposed to be inspected by the Environmental Health Division at least once every six months.

And this isn’t Pappas’s first restaurant-related political problem. After voting to enforce a mandatory $15 minimum wage earlier this year — and saying he would like to see it increase over time to $20 or even $25 an hour — Pappas was confronted with the fact that he’s still hiring workers for $12.50 an hour or less at his own business.

Pappas has many influential allies in Granite State politics and the press, and the Puritan Backroom has become an all-but-mandatory stop for 2020 presidential candidates coming through the Manchester area.

Is this special treatment for a politically-connected Democrat? Or just garden-variety government incompetence?