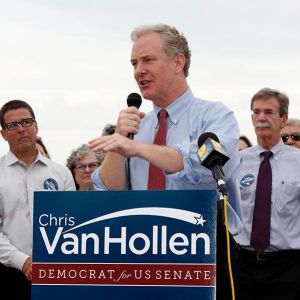 Though hardly a firm commitment to compensatory payments for African-Americans, the remark was nonetheless a striking election-year pronouncement from the U.S. Senate candidate and top Democrat on the House Budget Committee.

Van Hollen made the little-noted comment Jan. 27 on WHUT-TV, the public television station at historically black Howard University in Washington, D.C. His remarks came as a response to host Rock Newman, who lamented federal lawmakers’ refusal to vote on a longstanding bill from Rep. John Conyers, D-MI, establishing a commission to study slavery’s enduring effects and “make recommendations to the Congress on appropriate remedies.”

Noting that Conyers first introduced his bill in 1989, Newman asked, “What does it say about Congress as an institution that it won’t at least examine that issue?”

“Well, first of all,” Van Hollen said, “we can never totally erase the original sin, the evil of slavery, but we should do everything in our power to address the challenges that have come about because of that. I applaud Congressman Conyers for that legislation. I think we need to look at moving forward on that.”

Van Hollen argued that America must take more immediate action to reduce inequality, but that doesn’t preclude pursuit of reparations in the future. “It seems to me we can pursue both paths,” the congressman said.

InsideSources asked Van Hollen’s Democratic rival for the Senate, Rep. Donna Edwards, whether she supported the Conyers bill in specific and reparations in general. In an emailed statement, Edwards said, “Congressman Conyer’s effort to study the impact of slavery on black families living today would be an important addition to the conversation on how to achieve equality in this country.”

Like Van Hollen, she went on to stress the “need to focus on the problems facing communities of color today, and that means making targeted investments by census tract in all our communities, ending the militarization of our local police forces, fixing a broken criminal justice system, and giving people a second chance to rebuild their lives.”

Conyers has introduced his legislation, H.R. 40, at the start of every Congress for more than a quarter century, with the number 40 evoking the “40 acres and a mule” promised to freed slaves after the Civil War. It’s never gotten any traction, but Atlantic writer Ta-Nehisi Coates thrust the issue back into national discourse in 2014 with his celebrated article “The Case for Reparations.”

“A country curious about how reparations might actually work has an easy solution in Conyers’s bill,” Coates wrote. “We would support this bill, submit the question to study, and then assess the possible solutions. But we are not interested.”

But two years later, the issue of reparations has popped up in the contest to choose the Democratic Party’s presidential nominee, with Bernie Sanders facing tough questioning, led by Coates, after the Vermont senator dismissed the idea earlier this year. The senator has continued to catch flak for it, including in a well-publicized appearance at a Minnesota forum on black America. One panelist accused Sanders, who has struggled to win black voters in his primary campaign against Hillary Clinton, of being afraid even to use the terms “black” and “reparations.”

Like Sanders, Van Hollen is a white candidate who needs strong black support to prevail, especially up against Edwards, a black woman running explicitly on her race and gender.

Wednesday was the congresswoman’s turn on Rock Newman’s show, and she talked at length about her lived experiences as black woman, even recalling the Afro she sported earlier in life. Asked about racism and presumptive Republican presidential nominee Donald Trump, she said the business mogul’s “very frustrated, very angry” supporters are legitimately upset about being left out of the economy. However, she also criticized Trump’s racial rhetoric.

“He’s pointing a finger,” Edwards said, “and unfortunately he’s pointing that finger to immigrants, communities of color, women who’ve moved into the economy, black folk, and really he should be pointing the finger at himself — the one percent that has ripped off working people, that traded jobs outside of the United States.”

Edwards specifically condemned Trump for the now infamous CNN interview where he declined to condemn the Ku Klux Klan and its former leader, David Duke, who endorsed his White House bid.

“Donald Trump went to some of the finest universities in the country,” the congresswoman said. “He knows exactly who the KKK is. He knows who David Duke is.”

When it comes to Trump’s racial politics, she added, “It’s not a dog whistle anymore. It’s like a bullhorn.”

For his part, Van Hollen also addressed Trump with Newman, calling the mogul “such a reckless choice for president that I think any of the Democratic nominees … could win that race.” He agreed with the host that Trump is tapping into racism, and called his style of politics “un-American.”