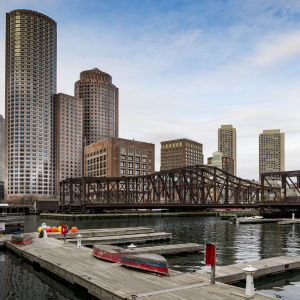 Verizon, one of the largest Internet providers in the U.S., announced a landmark move in Boston this week, where the provider plans to invest $300 million to replace the city’s aging copper infrastructure with a high-speed fiber-optic network — transforming the city into one of the most “technologically-advanced” in the U.S., and bringing competition to Comcast, the dominant provider.

“Boston is moving faster than our current infrastructure can support, and a modern fiber-optic communications platform will make us a next-level city,” Boston Mayor Martin Walsh said Tuesday. “Additionally, it is a priority to ensure that every resident has expanded access to broadband and increasing competition is critical to reaching that goal.”

The expansion will go from neighborhood to neighborhood over the next six years with the city expediting the permitting process.

“[T]he project will begin in Dorchester, West Roxbury and the Dudley Square neighborhood of Roxbury in 2016, followed by Hyde Park, Mattapan, and other areas of Roxbury and Jamaica Plain,” a statement from the mayor’s office said.

Boston marks the first new rollout of Fios since 2010, when the company announced the end of a $23 billion network upgrade project. The high-speed Internet boost afforded by the project is aimed at keeping pace with high-tech businesses Walsh’s administration has sought to court since becoming mayor.

It will also boost broadband competition and lower prices in the city, where 90 percent of residents only have the choice of a single provider, according to the city’s chief information officer.

Expanding it’s top-tier network to Boston follows Verizon’s history in the city, where it deployed one of its first 4G LTE networks in 2010, and where it plans to test bleeding-edge 5G wireless technology. In addition the provider plans to deploy wireless equipment to city street lights and utility poles, enabling better mobile broadband for residents.

High-speed fiber, capable of delivering gigabit ethernet download speeds of 1,000 Megabits-per-second (100 Mbps is considered fast) far exceeds the 10-25 Mbps routinely offered by cable providers like Comcast and Time Warner Cable, and is only available in a handful of cities in the U.S. including Kansas City, Missouri, Omaha, Nebraska, Minneapolis, Minnesota, Seattle, Washington and San Francisco, California.

Verizon has not announced pricing tiers for Boston, but the company has previously offered Fios in other cities for $69.99 per month for a 100Mbps broadband, telephone and TV bundle.

“This transformation isn’t just about advanced new fiber-optic technology – it’s about the innovative services this platform will allow people to create and use, today and in the future,” Verizon Wireline Network President Bob Mudge said Tuesday. “We are delivering the promise of the digital world to families, schools and medical facilities, businesses and entrepreneurs, while strengthening our neighborhoods and communities.”

Verizon has already set-up a webpage dedicated to receiving input from businesses seeking to take advantage of the service, asking for their location so the provider can prioritize the rollout.

The announcement comes months after the Federal Communications Commission voted to allow legacy providers like Verizon to retire their copper-based networks in place of new Internet Protocol-based infrastructure like high-speed fiber.

At the same time the agency began exploring updates to the broadband “special access” market, whereby it mandates larger providers like Verizon lease portions of their high-speed networks to smaller providers like Sprint or Level 3. Those businesses turn around and offer the services to businesses, but have complained in recent years the contracts with larger providers are unfair and anticompetitive.

FCC Chairman Tom Wheeler announced the details of a proposed rulemaking to regulate the special access market last week, just days after a study from the broadband industry found such rules could hurt expansions like the one Verizon announced in Boston this week.

The aim is to cover all of Boston’s 650,000 residents, few of whom has access to Fios in Massachusetts suburbs and in the city, in addition to city schools, hospitals and libraries.

Verizon has not announced whether Boston is a one-off expansion, or if the company will begin expanding fiber to other cities.