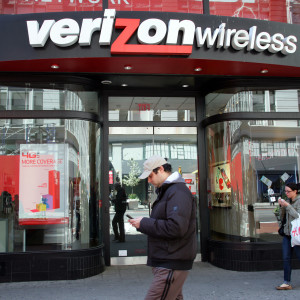 Verizon has partnered with some of the biggest names in tech hardware manufacturing to start testing 5G connectivity in the real world, where multi-gigabit wireless download speeds will power high-bandwidth services like 4K video streaming, gaming and the future world of connected devices.

The company announced at Barcelona’s Mobile World Congress Monday it has begun 5G trials in Euless, Texas, Hillsboro, Oregon, and Basking Ridge, Bridgewater and Piscataway New Jersey, where Verizon beat AT&T, the second largest provider in the U.S., to be the first one to test 5G at home.

“Verizon continues to accelerate innovation around 5G technology by working closely with our partners,” Verizon’s senior vice president of technology strategy and planning Ed Chan said Monday. “We were the first to launch 4G nationwide. With 5G, we will again drive innovation across the technology landscape to bring new solutions to market for our customers.”

“Our field technical trials are proving that 5G is here and ready to be commercialized,” he continued, “and we’ve constructed several test beds that represent real-world environments.”

While the “real world” testing described in a Verizon’s announcement only extends to the backyard of the nation’s largest wireless carrier, the tests themselves demonstrate the next great leap in wireless connectivity will power the next generation of connected devices everywhere from moving cars to inside homes and buildings.

Though still a ways off in development and deployment, the next step beyond 4G Long Term Evolution (LTE), which allows for the delivery of millions of bits per second, could be up to 1,000 times faster with four times more global coverage, and allow for download speeds of 10 gigabits-per-second for at least 100 billion devices. According to Cisco, such coverage and connectivity will be necessary to keep up with the 24.3 exabytes per month of global data traffic expected by 2019.

Using fixed wireless and mobile 5G trial equipment, the company has successfully tested 5G connectivity in multiple real-world scenarios, including through the use of high-frequency millimeter wave bands to generate connectivity in the multi-gigabits per-second range (essentially the same as a high-speed wired fiber connection), with latency reduced to the millisecond range across varying of distances, allowing for wireless 4K video and virtual reality streaming.

The wireless giant has joined with tech and telecommunications firms across the industry including, Apple, Cisco, Ericsson, Intel, LG, Nokia, Samsung, and Qualcomm, who together along with venture capital groups across the U.S. form the Verizon 5G Technology Forum, the goal of which is to drive the development of technological standards and fundamentals for 5G.

While that testing has so far been limited to controlled indoor trials and a slow-moving van full of equipment acting as a 5G device, Verizon says select customers will by trying out the technology on commercial devices by next year.

Congress and the Federal Communications Commission are working to do their part in ensuring the fast rollout of nationwide 5G, including through legislation designed to free up underused spectrum from the federal government and the FCC’s upcoming incentive auction.

“I had a conversation with the CEO of one of the major companies a couple of weeks ago, and he said … that by 2020 … even if they have 90 percent of their traffic offloaded onto WiFi and other networks, he’s still going to be out of spectrum. And this is a company that has a lot of spectrum,” FCC Chairman Tom Wheeler said last year while predicting success at the auction, where television broadcasters will sell airwaves back to the FCC for auction to wireless providers.