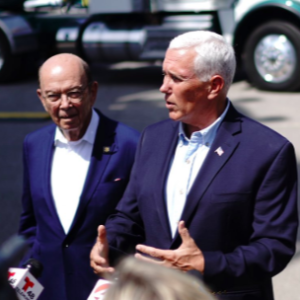 The United States-Mexico-Canada Agreement (USMCA) will stimulate an “energy revolution” in New Mexico and the nation, and it must be ratified by Congress, Vice President Pence said during a recent visit to the Permian Basin, the vast oil and natural gas producing area in the southeastern part of the state. And he urged Congress to pass the trade agreement when they return to Washington in the fall.

“The best place to turn up the heat for the USMCA is here in New Mexico,” Pence told the crowd of more than 500 at Elite Well Services in the City of Artesia. “The president has done his job. Mexico and Canada have done their jobs. Now it’s time for Congress to do [its] job and pass the USMCA and pass it this year.”

The USMCA is a renegotiated version of NAFTA. It was signed by Trump, former Mexican President Enrique Peña Nieto and Canadian Prime Minister Justin Trudeau on November 30, 2018. Mexico ratified the agreement in June and, with its passage all but certain in Canada, the onus is now on Congress.

Pence and other speakers at the Artesia event highlighted the modernized trade agreement, including new rules calling on automobile manufacturers to produce 75 percent of their parts in North America to qualify for zero tariffs, and 40 to 45 percent of those parts must be manufactured by workers earning $16 an hour or more by 2023. It also adds protections for intellectual property, the pharmaceutical drugs industry and provisions for digital technology.

The vice president said if Congress approves the deal, it would open up new markets for New Mexico products and create jobs.

“Given our growth over the past several years, we are the focus for the industry and the country, and people are increasingly looking at the Permian [Basin] and looking at New Mexico as an area to drive additional production,” McEntyre told InsideSources. “That is because the Permian is so attractive: The geology is right… and the producers here in the Permian have figured out how to produce oil and natural gas economically.

Pence acknowledged the ongoing boom in oil and gas production in the Permian Basin.

“To keep the American economy growing, to keep to American energy rolling, President Trump and I also know that we need to level the playing field for American energy and American workers by forging trade deals that put America first,” the vice president said.

“You are providing the energy independence that has eluded the U.S. since the first Arab oil embargo,” Ross said.

In a news conference following the event, the vice president repeated Trump campaign claims reported in InsideSources that the president has a good chance of winning New Mexico in 2020.

Hillary took the blue state in 2016 with 48.3 percent of the vote to President Trump’s 40.0. Hometown favorite and former governor Gary Johnson got 9.3 percent, which could have made a difference in the New Mexico numbers.

“It was a competitive race in 2016, and the president and I truly do believe that New Mexico is in play,” the vice president said.

“I campaigned in New Mexico during the last campaign, and I’ll tell you what: The president has made a tremendous connection with the people of this state — whether it’s dealing with the crisis of illegal immigration, whether it’s supporting an American energy renaissance, whether it’s advancing policies that have [created] a booming American economy,” Pence said.