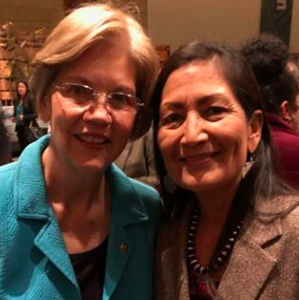 Presidential candidate Elizabeth Warren has picked New Mexico U.S. Rep. Deb Haaland as one of three female co-chairs of her campaign. Haaland, a progressive Democrat, is one of the first Native American women to serve in the U.S. Congress.

The congresswoman — elected in 2018 — is a 35th generation New Mexican, a former leader of the Democratic Party of New Mexico and a member of the Laguna Pueblo people.

The other two co-chairs of Warren’s campaign are also progressives: Rep. Katie Porter is a former student of Warren’s at Harvard Law School, who won in a traditionally Republican California district. Rep. Ayanna Pressley is the first black woman to represent Massachusetts — and considered a member of “The Squad” — four congresswomen of color also elected in 2018, who are on their party’s extreme left.

The subtext in Haaland’s working with Warren is the ruckus that erupted over the Massachusetts Democrat’s now-debunked claims of Native American heritage.  For years as she worked her way up the academic ladder, from the University of Houston to Harvard, Warren — a caucasian woman from Oklahoma– repeatedly declared on official documents that she was a Native American, including her Texas State Bar application in 1986.

Many tribal leaders and Cherokee activists criticized Warren for her unsupported claims. In a private meeting with the leader of the Cherokee Nation Warren apologized for a highly-publicized DNA stunt designed to prove her Native ancestry (it failed) and conceded that the test didn’t prove she was a member of any tribe.

Haaland insisted that despite the fact that Native American tribal leaders had criticized Warren over her ancestral assertions, they have accepted her support of indigenous matters as proof of her allegiance to issues of concern to their people.

On a website called Indian Country Today, Haaland announced her support for the presidential candidate in an op-ed last week with the headline “Elizabeth Warren Is a Champion for Indian Country.”

“Elizabeth’s conversations with Native leaders deeply informed [them of] her comprehensive plan to protect tribal sovereignty and advance tribal self-determination,” Haaland wrote in the op-ed. “Elizabeth Warren recognizes the painful history of America’s mistreatment of Native peoples and the federal government’s responsibility in perpetuating these injustices.

“We need a leader who is not afraid to stand up for our communities. We need someone who knows how to fight, knows how to win — and will be a champion for Indian Country the minute she steps into the White House,” she said. “Donald Trump is no match for a woman with a plan — and that’s why I am proud to endorse Elizabeth Warren for President in 2020.”

When asked by Al Sharpton on his MSNBC show — “PoliticsNation with Al Sharpton” —why Haaland recently labeled Trump a racist, she noted the president’s ubiquitous references to Warren as Pocahontas and insinuated that the president’s aide Stephen Miller is a “white nationalist.”

“He’s got a white nationalist who is managing his immigration policy,” Haaland said Saturday. “I could go on and on with a long list of reasons why — not to mention the fact that he uses the name Pocahontas as a racial slur.”

Haaland said Trump’s campaign style is to do “whatever he can to disparage other people,” which has led to a divided nation.

“We need a champion in the White House who cares about the disparity that we are experiencing right now in our country,” she said. “Since he [Trump] has been in office —separating families at the border, banning people because of the color of their skin or the country they come from — we have seen the worst of what a president can be.

“So, I think that we need somebody who has compassion and cares about diversity in our country and wants to value that,” Haaland said. “I think that Senator Warren will be extremely cognizant and compassionate when it comes to those issues and I think she’ll be a breath of fresh air, quite frankly.”

Warren announced her choices on Twitter with an accompanying video.

“It’s my honor to have @Deb4CongressNM, @KatiePorterOC, and @AyannaPressley as my Campaign Co-Chairs,” she tweeted. “Big structural change can’t wait, and we’ll fight for it—together.”