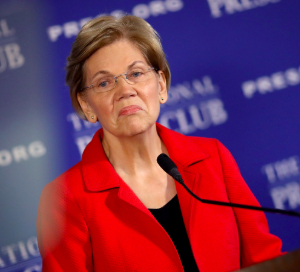 Warren Says Coming to US Illegally Shouldn’t Be A Crime. How Will That Play in New Hampshire?

New Hampshire is a long way from the Rio Grande. But the opioid crisis and drug abuse crisis plaguing the Granite State has direct links to actions taken at the U.S. southern border.  It’s no coincidence that Lawrence, MA is both a hub of illegal immigration and drug trafficking in New England.

On Tuesday, Sen. Elizabeth Warren announced that she supports changing the law so that coming to the United States illegally and remaining here in defiance of the law will no longer be a crime, merely a civil offense.

“We should not be criminalizing mamas and babies trying to flee violence at home or trying to build a better future. We must pass comprehensive immigration reform that is in line with our values, creates a pathway to citizenship for undocumented immigrants including our DREAMers, and protects our borders,” Warren told the HuffPost.

Crossing the border illegally is currently a misdemeanor. However, other activities like harboring illegal immigrants and working in the U.S. off the books or under a false ID are felonies that are all but unavoidable once you enter the country illegally.

Warren’s rejection of criminal penalties for illegal immigration echoes Democrats’ position on the detention facilities run by the federal government at the southern border. Rep. Alexandria Ocasio-Cortez calls them “concentration camps” because of the over-crowding, yet Democrats’ simultaneously refuse to support more funding to add space, beds, bathrooms, etc.

“Warren’s fans in the mainstream media keep presenting her as a serious policy wonk, but this is not a serious policy plan,” Jessica Vaughan of the Center for Immigration Studies told NHJournal.  “It is just misleading hyperbole and pandering pablum.  Apparently, her plan is to allow any mama or baby, or anyone pretending to be a mama with baby, to waltz into the US because they want a better future.  Who in the world doesn’t?  But what about the future for Americans?

“The values she represents with this plan are the values of employers who want workers to earn less. They’re the values of politicians who want us to have worse schools, huge tax bills, more multiculturalism, and less safety and security in their communities.  Warren’s plan is not a solution and would only inspire more illegal immigration and wipe out our borders,” Vaughan said.

Supporters of decriminalization say that’s not true, that they support giving people court dates and hearings before immigration judges. Immigrant advocates dispute data from border officials that most illegal immigrants given such court dates never show up.

However, they also oppose deporting people who’ve been ordered to leave the country after their hearing before a judge. So once again, if it’s wrong to detain them, and it’s wrong to deport them for ignoring the immigration judge’s order–what’s the alternative, other than allowing everyone to stay?

This is not a popular idea in New Hampshire, or America.

In a 2017 survey, 70 percent of New Hampshire residents–and a plurality of Democrats–said they support checkpoints at the Canada/New Hampshire border. America’s northern border is hardly a hotbed of crime, and yet Granite State voters still want it secured.

According to Gallup, 23 percent of Americans say immigration is their top political issue today, the highest level they’ve ever recorded. The only problem that rated higher is “government” (aka “I hate Trump”) at 26 percent.

Do Democrats like Sen. Warren, who has a realistic chance of being their party’s nominee, really want to embrace a radical position (decriminalizing illegal immigration and opposing deportations for people ordered out of the country) on such a hot-button issue?

Is that smart politics for, say, a U.S. Senator running for re-election in New Hampshire, or a Democrat challenging a popular, incumbent governor in the Granite State?