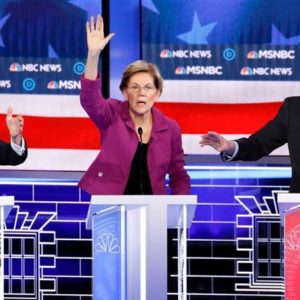 “I’d like to talk about who we’re running against. A billionaire who calls women fat broads and horse-faced lesbians, and no I’m not talking about Donald Trump, I’m talking about Mayor Bloomberg.”

With that, Sen. Elizabeth Warren kicked off the most contentious debate of the Democrats’ 2020 primary, two hours of direct attacks by all the candidates on both policy and character. And the roles of “most frequent target “and “least effective debater” were both played by Mike Bloomberg.

“Right out of the gate, it was clear each of his five fellow Democrats came prepared to knock down Mike Bloomberg. For his part, Bloomberg did not fare so well under the withering attacks,” said Mitchell S. McKinney, director of the Political Communication Institute at the University of Missouri.

From his stop-and-frisk policy to his refusal to release his tax returns to the non-disclosure agreements (NDAs) signed by female
employees allegedly to resolve issues of inappropriate workplace behavior, Bloomberg was called out by every candidate on the stage, most notably Liz Warren.

“Democrats are not going to win if we have a nominee who has a history of hiding his tax returns, of harassing women, and of supporting racist policies like redlining and stop-and-frisk. Look, I’ll support whoever the Democratic nominee is. But understand this: Democrats take a huge risk if we just substitute one arrogant billionaire for another,” Warren said.

Bloomberg appeared utterly unprepared for attacks most pundits expected, stumbling through answers that sometimes inspired laughter from the Las Vegas audience. “It was the first time Mayor Bloomberg’s positions and past were held to cross-examination and not just a paid media narrative,” former Obama for America spokesman Zach Friend told InsideSources. “And he openly struggled with his answers. In particular, his answers on the NDAs made the audience cringe, and it seemed his opponents were more prepared to challenge his actions than he was to defend them.”

Or as political analyst Bruce Mehlman put it: “Bloomberg brought a wallet to a knife fight.”

“Mayor Buttigieg really has a slogan that was thought up by his consultants to paper over a thin version of a plan that would leave millions of people unable to afford their healthcare,” Warren said. “It’s not a plan, it’s a PowerPoint.

The two Midwesterners seemed taken aback by the attacks, perhaps because strategically they made little sense. Bernie Sanders, and not these purported moderates polling in the single digits, is blocking Warren’s path to the nomination, but she left Sanders relatively unscathed. As a result, she’s made it less likely that their supporters will back her if she’s still in the race when they drop
out. It may have given Warren the best hour of fundraising since she entered the race, as her campaign reported, but it’s a puzzling long-term strategy for a candidate whose pitch is that she can unite the supporters of the same candidates she’s attacking.

Watching the debate in Duncan, S.C., where Bernie will be competing in just over a week, Sanders supporter Irena Schulz told InsideSources that Warren’s performance was appreciated, but it won’t change any votes. “Warren’s tongue-lashing put Bloomberg in his place early on in the debate, but her waffling on Medicare For All and then accusing Bernie of misogyny in the previous debate nailed her coffin shut. While I appreciated her stern remarks about Bloomberg, it won’t be enough to revive her campaign.”

Sanders supporters should be pleased with the results of Wednesday’s debate. The focus on Bloomberg helped Bernie avoid being a high-priority target himself, and Bloomberg also took up time that Biden, Buttigieg or Klobuchar could have used to boost their campaigns on the eve of the Nevada caucuses.

“Perhaps the biggest winner in Vegas Wednesday night was President Donald Trump. For every attack a Democrat made against a fellow Democrat — and there were many —  the target of their ire was not directed toward the incumbent president,” McKinney said. “Democratic voters may be no closer to answering the question of which — if any — of these Democratic candidates are capable of beating Donald Trump.”

Veteran Democratic strategist Bob Shrum agreed, tweeting: “This is a cheap shot derby. The winner so far is Trump.”