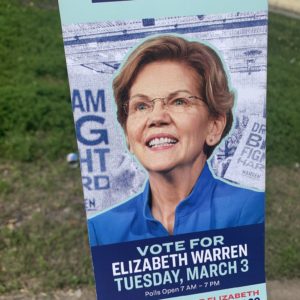 Where Does Liz Warren Go to Win?

BOSTON — There have been three frontrunners over the course of the 2020 Democratic primary, and two of them have gotten big wins thus far. Sen. Bernie Sanders lapped the field in Nevada and Joe Biden blew the doors off in South Carolina. Who’s missing?

Warren has yet to finish higher than third place and has been held to single digits in the last three contests. When the South Carolina results came in, Warren was 1,000 miles away in Houston, Texas. “I’ll be the first to say that the first four contests haven’t gone exactly as I’d hoped. But Super Tuesday is three days away,” Warren said.

About that same time, a new Suffolk University poll found her trailing Sanders in her home state of Massachusetts. It’s the fourth poll in a row with Warren losing the Bay State to Bernie, giving Sanders a RealClearPolitics average of 24.7 percent to Warren’s 20.7 percent.  It’s unlikely Liz Warren’s fifth-place finish in South Carolina will help.

As a result, Democratic strategists and activists are openly discussing Warren dropping out of the race, as part of a push to consolidate support for Biden in order to stop Sanders. “You’re going to hear Democrats in coming days calling on candidates like…Elizabeth Warren to get out of the race,” former Obama administration official Marie Harf told Fox News after Saturday’s numbers came in.

“This is now a two-person race: Biden and Sanders,” said veteran Democratic presidential campaign strategist Bob Shrum. “Mike Bloomberg has almost certainly lost his bet that Biden would fall apart so he could become the alternative to Sanders.”

And now, Shrum says, other candidates like Warren should suspend their campaigns. “Reality is reality.”

For Warren, the prospect of following in the footsteps of Sen. Marco Rubio (R-Fla.) and Gov. Jerry Brown (D-Calif.) and losing her home state in a presidential primary is extremely real. On Saturday afternoon, Sanders addressed a crowd on Boston Common at one of a series of rallies he’s holding across the Bay State.

Calls for Warren to abandon the field and Sanders’ aggressive campaigning have inspired anger and resentment here in Massachusetts.

“It’s way too close to call and she could definitely win the primary,” Massachusetts Democrat and co-founder of Left of Center Mara Dolan told InsideSources. “I think she’s in until the very end. She persists. Good for her.”

“This is her house. This is her turf,” former Cambridge Mayor Marc McGovern told a group of Warren supporters going door-to-door this weekend. “We are her people.”

And the Boston Globe, who endorsed Warren earlier in the week, ran a column Saturday declaring Sanders’ decision to campaign in Massachusetts “disrespectful” and “shabby.”

“His raid behind her political lines is an affront to his Senate colleague, supposed friend, and left-wing ally,” Globe columnist Scot Lehigh wrote. “Any advantage he gains would come at the cost of her dignity.”

But politics isn’t an occupation that prizes dignity. It only respects vote counts and victories, and the Warren campaign has yet to identify a Super Tuesday state — with the possible exception of Massachusetts –that she can win.

Despite her struggles. Warren shows no sign of stopping. After Tuesday night’s drubbing, she went launched an attack on her Democratic rivals. “Let’s be blunt. This crisis demands more than a former vice president so eager to cut deals with Mitch McConnell and the Republicans that he’ll trade good ideas for bad ones,” told supporters in Houston. She even took a rare swipe at Bernie Sanders:

“This crisis demands more than a senator who has good ideas, but whose 30-year track record shows he consistently calls for things he fails to get done, and consistently opposes things he nevertheless fails to stop,” Warren said.

She plans to campaign in Massachusetts on Super Tuesday before heading on to Michigan later that day. “This is winning, I’m loving every minute,” Warren said a few days ago about her campaign.

“She’s got nowhere to go but to embarrass herself in her home state,” Griffith told InsideSources. “When you’re a progressive who can’t carry Cambridge, you’re done, finished — or as they say in Southie: ‘Ovah!'”