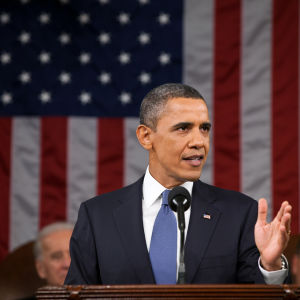 Why Obama Hopes Millennials Watch His Last State of the Union

In March of last year, the longtime political writer Andrew Sullivan told an anecdote that speaks volumes to how President Barack Obama perceives his legacy: he said Obama once confided, “Maybe I’m president 20 years too soon.”

That statement underscores a central truth about this White House — one that looms large as the president prepares his final State of the Union address for Tuesday night.

Looking back, the Obama administration’s policies have always best aligned not with the country as a whole, but with a particular growing segment of the population. It’s what National Journal’s Ron Brownstein calls the “coalition of the ascendant,” made up of minorities, college-educated white women and the much-scrutinized Millennials born beginning in the early 1980s.

Polls show a clear majority of this generation favors liberal goals such as a pathway to citizenship for undocumented immigrants and government action to combat climate change. Even more troubling for Republicans, over 70 percent of Millennials now support gay marriage, and many imbue the issue with “a tremendous amount of symbolic significance,” as Pew Research Center’s Scott Keeter told Congress last summer.

On all of these subjects, Obama has leaned toward gathering waves of public opinion, hoping it’ll pay off for him, Democrats and the progressive movement in the long term. Questions do linger about whether groups that helped elect the president will keep endorsing left-leaning politics, but he clearly anticipates a paradigm shift — the transition to an increasingly multicultural and even social democratic America.

It’s in this context that Obama’s aides launched “an unprecedented campaign for the attention of the next generation, the millennials” to watch Tuesday’s speech, Politico reported. “They are hosting a “West Wing”-inspired online Q-and-A session with more than 50 administration officials called “#BigBlockofCheeseDay.’’ They’ll provide annotations of the speech on Genius, behind-the-scenes moments on SnapChat and Instagram, and on Friday, interviews of the president by YouTube stars Destin Sandlin, Ingrid Nilsen and sWooZie.”

White House Press Secretary Josh Earnest, 38, has been leading these efforts. He took over the White House Instagram account Monday, showcasing his interviews previewing the speech with news outlets — including Hispanic media — and celebrating how the president “crushed” an appearance on NBC News. One of the key themes he’s stressing: the need to shift focus from “the next election to the next generation” and beyond.

“The kinds of decisions that we make now will have a significant impact on not just the next generation of Americans but future generations,” Earnest said at his Monday briefing with reporters.

The White House won’t acknowledge it, but there is some question about how exactly today’s young people will shape politics. The libertarian-conservative group Generation Opportunity released a report Tuesday showing that “48 percent of Millennials now believe that the American Dream is dead.”

According to Pew data cited, “Millennials are also the first in the modern era to have higher levels of student loan debt, poverty and unemployment, and lower levels of wealth and personal income than their two immediate predecessor generations (Gen Xers and Boomers) had at the same stage of their life cycles.” These trends, combined with the lowest-ever labor force participation rate for people 18-29 and 40 percent underemployment, paint a bleak picture of Millennial economics under President Obama. Generation Opportunity points to young people delaying life events such as marriage and home ownership as further evidence of liberal policy failure.

What matters here is whether Millennials buy arguments against Obama’s recovery strategy or attribute their struggles primarily to the economic crisis the president inherited in 2009. In other words, does the past seven years sour them on progressivism?

As Jared Meyer of the conservative Manhattan Institute is quick to note, there’s some evidence that the generation’s affinity for liberalism is overblown.  Young people tell polls they prefer less government if more means higher taxes. They also appear to oppose regulation of on-demand economy services such as Uber and Airbnb, a key priority of the Democratic-aligned labor movement.

Still, the fact remains that Republican pollster Kristen Soltis Anderson has made a name for herself with a book premised on the GOP’s utter failure to court Millennials. She finds young people seeing her party as “closed-minded, racist, rigid, [and] old-fashioned.” Meanwhile, Obama has had tremendous success engaging them through social media.

It’s exactly what he’ll try to do tonight, at 9 p.m. The Associated Press called the president “wired up, and ready to go,” with annotated versions of his speech on Whitehouse.gov, YouTube, Facebook, Twitter and several other platforms.

This is Obama in legacy mode, hoping Millennials like the media as well as the message.