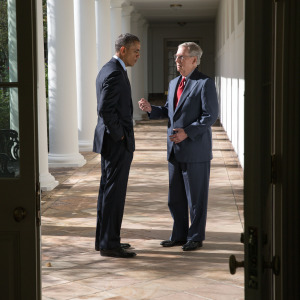 Why Should We Take the President Seriously?

Sometimes, what happens in politics makes it impossible for serious people to have serious discussions on serious issues.  That hardly is ever a good thing.  It is never a good thing when the source of the inability to engage in a reasonable debate is none other than the President of the United States.  In this case, it would be President Obama.

Let’s take three topics—the recent election, ObamaCare, and immigration.  If they prove anything, they demonstrate the President simply cannot be taken seriously.

The votes of the 2014 election are barely counted, Republicans achieve a tremendous victory, by any definition of the term.  How does President Obama react?  First, he more than implies that the two-thirds of the electorate who did not vote are also voices that should be considered, as if there was some basis to do it, much less do it on the premise they “secretly were for us the whole time” as the joke goes.  Never mind that every post-election survey shows the voters—overwhelmingly want two things: a reduction in gridlock and, despite tortured liberal logic to the contrary, by a majority (more than 55 percent) they want action based on the Republican agenda.

I suppose the President has the authority to be resistant to all of that, but he cannot simultaneously insist he wants to “work together,” only to do the opposite.  In fact, you can easily argue that he has specifically chosen to avoid working together.  The proof positive of this is the Keystone Pipeline, which just recently failed to garner 60 votes in the upper Chamber despite the support of several Senate Democrats and a related bill in the House that passed with a significant number Democrats in support.   Despite his own State Department flatly stating that the project poses no risk to harming the environment, or the notable number of Democrats who supported passage, he promised a veto had the bill reached his desk.  How can that remotely evidence a desire to work together?

On ObamaCare, let’s leave aside the Gruber news or the broken promise “if you like your health care plan, you keep it, period.”  Let’s talk instead about the individual mandate.

Throughout the debate over the bill, the President constantly said the individual mandate was not a tax, even wagging fingers at United States Senators who claimed it was.  Let’s call that day one.  The bill passes.  Many go to court arguing the law is not in compliance with the Constitution when it comes to this individual mandate.  What happens?  The Justice Department, led by Eric Holder, says nobody can litigate the individual mandate because, well, a tax and taxes are imposed by the legislative branch and not subject to removal by the judicial branch.  Let’s call that day two.  On what we call day three, the Justice Department argues to the Supreme Court the mandate is a tax, and the Court upholds the Constitutionality of ObamaCare on the basis that the mandate is effectively a tax.  So, what happens on day four?  The press secretary to the President of the United States proclaims the Administration does not consider the mandate a tax, as if the Justice Department somehow snuck by the White House with their argument.  If this is not intellectual dishonesty at its worst, please tell me what might be.

Now, onto the current debate – immigration.  In 2010, President Obama defended his deportation of illegal immigrants saying it would be unwise and unfair to stop deportation.  He even indicated he must enforce the law by continuing to deport them.  Later in 2010 and through 2013, the President signaled his desire to end the deportation, even granting an amnesty of sorts, but repeatedly says he lacks the legal authority to do it, saying, “the easy way out is to try and yell and pretend like I can do something by violating our laws.”

But now in 2014, President Obama continues to say he wants legislation to address the issue, but will act if Congress fails to do so.  To start – it is a bad idea to end deportation.  Shortly thereafter – it might be a good idea, but without a new law would be illegal to do it.  November 2014 – what the heck, I am going to do it, with or without Congress passing any new legislation.

It is like he is saying, “I want to work with Congress, but not if it means me doing anything but I want in the first place.”  Or, “that mandate is what I say it is when I say it.”  And, “when it comes to illegal immigrants, I’ll do what I want based on my political interests, acting self-righteous every step of the way, no matter what my position or its relationship to anything I’ve said earlier.”

How can anyone engage in serious discussion when someone behaves in this manner?  The answer is you cannot.  No amount of orthodox liberal blather or love from a fawning legacy media will change this single important fact.  President Obama does not believe there is any reason to be honest in anything he says.  That is a problem for him.  It is a worse problem for America.