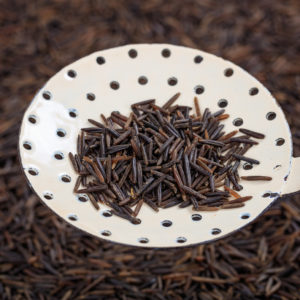 In the past, infrastructure projects have been stopped by lawsuits on behalf of salamanders, smelt and even crustaceans. But could a pipeline be stopped by a side dish?

Opponents of a pipeline project in northern Minnesota are arguing that a species of wild rice has rights that should be protected by the courts, and that those rights should prevent the pipeline project from proceeding.

At the heart of the matter is Enbridge Line 3, a pipeline running from Canada through northern Minnesota to Wisconsin. The aging line is due for maintenance, but protesters have been using the permit approval process to try to shut down the line altogether. The current pipeline runs through tribal land, though its replacement would follow an altered route. Now a quirky pronouncement about the cultural significance of wild rice may cause further headaches for the project.

The White Earth band of Ojibwe (also known as the Chippewa) has passed a tribal resolution affirming that wild rice has rights to, among other things, a free and clean environment. Manoomin, as wild rice is called in Ojibwe, is an important traditional food for the tribe, one which is already recognized in Minnesota state law. The new resolution follows a cultural affirmation to assert that the plant has a right to a particular habitat, using language which could easily be turned against the infrastructure project.

Going further, the resolution establishes that the plant has a right to clean water, freedom from patenting or contamination by genetically modified organisms, and a “healthy, stable climate free from human-caused climate change impacts.” The resolution is modeled after the “Rights of Nature,” which has been adopted by various environmental causes over the course of the last decade.

Although the theory of the rights of nature has been adopted internationally in places like Peru and Bolivia, it is a more recent development in the U.S. In 2016, the Ho Chunk tribe in Wisconsin was the first to affirm “Rights of Nature” in their tribal constitution. The White Earth band of Ojibwe are only the third tribe in the country to pass such a measure and the first to specifically award rights to a plant.

“This is a very important step forward in the Rights of Nature movement. This would be the first law to recognize legal rights of plant species,” Mari Margil, associate director of the Community Environmental Legal Defense Fund explained.

The actual impact of the measure will likely come in how it is enforced and who supports it. The wild rice resolution has already gained the vocal support of Winona La Duke, a high-profile environmental protester and White Earth tribe member.

“The law declares it illegal for any business or government to violate the rights of manoomin, and declares invalid any permit or authorization or activity that would allow those rights to be violated,” writes La Duke. “Offenders will be punishable under tribal law and held financially liable for any damages to the manoomin or its habitat.”

This could be tricky. Wild rice grows in lakes, marshes, and streams throughout northern Minnesota. Preserving its habitat could involve protecting a watershed that includes much of the northern third of the state, something that would help pipeline opponents.

Already, La Duke and her allies are gearing up for a major protest fight. The announcement of the rights of wild rice specifically called out Gov. Tim Walz (D), saying that a spill, and subsequent damage to wild rice habitats were “inevitable.” Protesters have planned to cross country ski a portion of the pipeline route in late February, pitching the event as an opportunity for the public to “[ski] against the proposed current of oil and to learn about, and participate in, the resistance that continues to build in Minnesota.”

They intend to also use the event to show where potential protest camps could be located. At this point, the protesters plan to build several camps to try to halt construction at various points along the pipeline route.

Police are prepping too. Across the river in Duluth, the police department plans to purchase riot gear for the first time. After resisting the trend towards increased militarization, the department will be upgrading its equipment with helmets, leg/knee pads, chest protectors, elbow pads and other protective equipment. They cite an increase in protests as a key reason behind the buy.

“The best way to look at this is as an insurance policy for us at a time when we’re seeing more demonstrations,” said Duluth Police Chief Mike Tusken.

Meanwhile, Walz is facing pressure at the state capitol, where environmentalists are pushing him to drop state approval for the project. The project has received formal approval from the PUC, but more than two dozen additional permits are necessary.

For years, people have been asking if another protest can match the scale of those seen at Standing Rock. With Line 3, environmentalists would like to try. Advocating for the rights of wild rice could be a start.