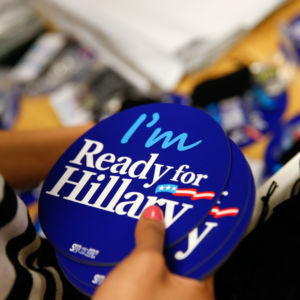 The 2016 election cycle is quickly shaping up to be the year of the super PAC. Less than four hundred families have provided about half the near-$400 million in donations to presidential campaigns, most of which have gone to the super PACs, according to the most recently reported data from campaigns, outside groups and the Federal Election Commission (FEC) — an agency that could find itself grappling with a whole new era of money in politics next year.

That’s because super PACs — formerly relegated to the mercenary status role of airing attack ads while kept at arms-length by candidates’ official campaigns — have been increasingly embraced by them since the Citizens United ruling in 2010, and on a scale never before witnessed in the 2016 cycle, with super PACs taking on chief electioneering roles like recruiting volunteers, contacting voters, organizing rapid response and generating email lists.

The direction of funds alone is telltale, with Jeb Bush’s official campaign raising $11.4 million compared to the $103 million brought in by his super PAC, Right to Rise USA, as of the end of the second quarter. And Bush is far from the only one — other top-tier GOP candidates, including Marco Rubio, Scott Walker, John Kasich, Chris Christie and Carly Fiorina, have all brought in more money through super PACs than their actual campaigns, with Ted Cruz claiming runner-up status behind Bush with $14 million raised on his own compared to $38 million from four affiliated super PACs working together on his behalf — an unprecedented strategy, according to campaign finance experts.

New campaign finance reports are due to the FEC by October 15.

Though the Supreme Court’s Citizens United ruling granted super PACs the ability to spend unlimited amounts of money in support of candidates, there are rules in place — albeit recently downsized and loosely enforced ones — to prevent them from working and coordinating with candidates behind closed doors.

But the temptation to bring in five, six and even seven-figure checks from a handful of wealthy donors compared to official campaign donations limited to $5,400 has become too much for candidates to forego.

Former President Bill Clinton is reportedly gearing up to hit the fundraising road this fall with Priorities USA Action, Hillary Clinton’s premier super PAC led by former 2008 campaign aide Guy Cecil, which partnered with another super PAC earlier this summer to bring in $24 million for Clinton. Both relaunched and began fundraising for the former New York senator just weeks after the 2012 election.

On Wednesday, Fiorina, the fastest riser in the GOP polls, spoke at an event hosted by her super PAC, Carly for America, in South Carolina, where supporters grabbed contact information from attendees before ushering them inside to hear the former HP CEO speak.

Despite the blurring lines, at least one FEC commissioner is unconcerned about the impact of Citizens United on super PACs, which have a few loopholes in their favor dividing the three-Republican, three-Democrat commission on enforcement, including a provision allowing campaigns and super PACs to coordinate, so long as their dealings are shared in view of the public.

“The First Amendment right of citizens and groups to advocate the election of candidates is not limited to broadcasting television ads,” Republican FEC Commissioner Lee Goodman told InsideSources. “Citizens have a First Amendment right to advocate the election of candidates through any medium they choose, whether through television ads or by knocking on doors and speaking to voters face to face, or by organizing like-minded citizens to engage in active support.”

“Therefore, citizens who form super PACs can exercise their First Amendment rights to communicate to voters in whatever way works for them, as long as they decide to do so independently of a campaign,” explained Goodman, who was careful not to speak on the record about any particular examples, lest he be forced to recuse himself from future FEC enforcement proceedings.

“A political group can decide that the optimal use of its resources is television ads or grassroots political organizing, and both political efforts are protected by the First Amendment.”

As super PACs and campaigns collude more and more out in the open, a growing number of voices have begun criticizing their behavior, including Goodman’s fellow commissioner and FEC Chairman Ann Ravel, who said the current election environment is akin to the “Wild West,” with America’s wealthiest donors threatening to usher in an era of outsized influence on the political process.

“In order for people to have faith in our electoral system, and in the political processes, they have to know that the law is being enforced,” Ravel told CBS News. “And people assume it.”

Ravel said the uptick in coordination in full view of the public is likely a result of the evenly divided commission’s inability to act, as it requires a majority vote to even open an investigation into potential illegal activity.

“I think that the likelihood is that the lawyers who are representing all the candidates are saying to them, the commission cannot get four votes to enforce any matter,” Ravel said. “Therefore, you can take risks with the law.”

Goodman has taken the opposite stance, arguing the Citizens Untied case paved the way for more political speech from a greater number of sources.

“My view is that the Supreme Court’s decision in Citizens United righted the ship of speech in America by allowing more voices and more ideas to be heard,” Goodman said. “Voices from the left and the right of the political spectrum have thrived under the First Amendment protection of the Citizens United decision.”

“Spending on political speech by liberal and conservative super PACs and non-profit organizations has been competitive since 2010,” he continued. “At the end of the analysis, all the Citizens United decision permitted was more words and more ideas to be expressed, and that’s a good thing.”

Goodman said he’s against regulations to limit the post-Citizens United landscape, not just because it would reduce the spectrum of voices in the political sphere and limit free speech, but because it’s unnecessary, as voters have the capacity to access a broad range of information — more so than at any other point in history, thanks to technology — and become informed voters.

“In all the debates over free speech versus government restriction of the money required to disseminate speech, commentators miss the bottom line,” Goodman said. “The people choose whether to listen to political messages, whether to be influenced by it, and how they want to vote.”

“People vote, not money. Each person gets one vote. The people are not sheep.”

For the time being at least, history would appear to side with Goodman. In the 2012 election — the first full cycle post-Citizens United — the Obama reelection campaign brought in $1.1 billion from arguably the most-effective digital grassroots campaign ever organized, while his super PAC raised $79 million. Mitt Romney’s super PAC fundraisers (which occasionally included appearances by the former Massachusetts governor himself) pulled in $154 million, while his campaign took in $1 billion.

The trend appears to be continuing in 2016. Donald Trump, the largely self-funded Republican frontrunner, has blasted his opponents for accepting campaign contributions in typical quid pro quo fashion, and Democratic frontrunner Bernie Sanders has forgone establishing a super PAC, going so far as to add, “Paid for by Bernie 2016 (not the billionaires)” next to the FEC disclaimer on some of his campaign materials.

That’s not to say change isn’t coming. Harvard law professor and constitutional lawyer Lawrence Lessig raised $1 million in one month to launch a single-issue presidential campaign with the stated goal of enacting campaign finance reform, including passing his Citizens Equality Amendment — legislation that takes aim at Citizens United by establishing strict limitations on the sources of campaign funds, limiting them to small-dollar donations and public funds.

Just last month the Democratic Party’s top election lawyers filed an emergency request with the FEC with the goal of taking advantage of the gray areas and loopholes Republicans are already using to sweep the field (Clinton’s super PACs, for example, are trailing her official campaign’s contributions at a difference of almost half — $24 million to $45 million — and the former secretary of state of has been reluctant to engage directly with super PACs).

The party is seeking clarification from the FEC on how declared candidates, their official campaign staff and volunteers are permitted to interact with donors for super PACs, including visits from the candidates themselves to fundraisers hosting a minimum of two donors. The request implies a number of candidates’ activities — including “exploring a potential candidacy” to fundraise directly with super PACs before officially announcing a bid — appear illegal.

Despite the implication, Democrats are prepared to adopt those practices should the FEC find them legal, though getting the evenly-divided commission to even open an investigation will be a challenge. The commission has so far spent 2015 in a deadlock, unable to reach a consensus on proposed rules or a myriad of Citizens United complaints filed by watchdog groups.

“The PACs have serious doubts about the permissibility of many of the activities,” the lawyers wrote. “Clear guidance from the FEC will provide legal assurance to the PACs and help guide the PACs’ actions going forward.”