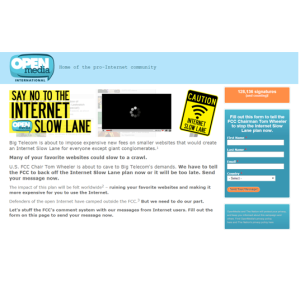 Organizations based outside of the Unites States, and some closely linked to the Occupy Wall Street movement, are calling on the Federal Communications Commission to regulate the Internet as a public utility. InsideSources has learned that an international coalition is coordinating to “rally the international Internet community around the next FCC comments deadline in September,” according to a recent email.

The organization leading the charge, OpenMedia, which is based in Canada and advocates net neutrality worldwide, states that net neutrality is a “domestic issue,” but it has already succeeded in collecting over 128,000 petition signatures to submit to the FCC, according to its website.

OpenMedia calls on its members to “stuff the FCC’s comment system with our messages.” An OpenMedia petition welcomes signatures from around the world, and the organization claims in an email to signers that each person’s message is “sent to FCC Chairman Tom Wheeler.”

A review of a filing from OpenMedia containing the first 73,192 signatures reveals that most came from outside the United States.

Other international organizations have also encouraged activism. The online forum Avaaz.org filed a petition with the FCC. While the organization states it collected 1.1 million total signatures, it submitted only signatures from the United States, which was less than 5 percent of the total.

Critics say these petition filings, which feature few Americans, raise questions over whether the FCC is able to monitor where the total of over 1.1 million comments originated. The FCC requests a mailing address when submitting comments via their online form, but the Commission also welcomes submissions through email, which allows for comments unassociated with a physical address.

InsideSources reached out to the FCC multiple times asking how it monitors from where comments are submitted. The FCC has declined to respond. It’s unclear whether the FCC tracks IP addresses of online submissions.

The international coalition is now in the process of planning its next push to flood the FCC with comments.

InsideSources obtained minutes from a recent conference call of the coalition, which was organized by OpenMedia. The group views the FCC’s rulemaking as a “teachable moment” that can be used as a case study for similar debates worldwide. The coalition plans to launch an “International Action for Net Neutrality” web portal to coincide with the FCC’s comment period. A spokesman for OpenMedia indicates the international coalition will not be submitting any comments directly to the FCC. A rough draft of the website has been distributed to the coalition, and the goal is to encourage activism from the international community.

The messaging behind the effort is intended to resonate as a populist movement. According to discussions in the meeting, the marketing of the campaign will likely be “The World vs. Big Telecom.” The language mimics that used by the Occupy movement and other campaigns, such as “The World vs. Banks,” which targets the World Bank.

Efforts will also focus on the European Union, Mexico, and Canada.

A number of left-leaning organizations in the US are active in the coalition. Among them is Popular Resistance, an organization that sprung from the Occupy movement and calls for the U.S. to be accountable to international law, provide free health care and college education, eliminate carbon and nuclear energy, and create a global tax. A representative of Popular Resistance encouraged “The World vs. Banks”-style framing on the conference call.

While liberal advocacy groups have a leading role, one corporate voice, Mozilla, is also active. Mozilla’s Director of Advocacy, Dave Steer, is advising the group.

In a statement to InsideSources, Steer said: “At Mozilla we are aiming to leverage the attention that the net neutrality coalition is getting in the U.S. as a teachable moment for Internet users throughout the world, to understand how the Web works and voice their point of view. Specifically we are lending the support of our global Maker Party campaign, which provides resources for people to understand net neutrality and includes activities for them to make their voice heard. You can read more about our global net neutrality teach-ins on our open policy blog.”

The international campaign is set to launch in early September. OpenMedia spokesman David Christopher tells InsideSources: “This is an issue that is being debated around the world and one that a great many Internet users and experts are concerned about. That’s why we’re helping to rally groups from across the political spectrum and across the globe to help amplify people’s voices, particularly given the backdrop of the Internet Governance Forum taking place in Turkey from 2-5 September.”