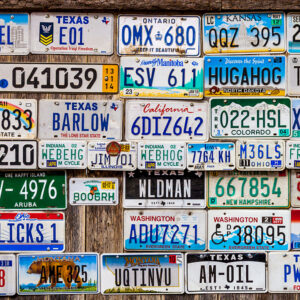 You’re So Vain: Vanity Plates and the Law

In Tennessee, Leah Gilliam filed a lawsuit in state court because her vanity plate was revoked after 10 years of use for being in violation of “good taste or decency,” according to the letter she received from the state Department of Revenue.

Her license plate read “69PWNDU,” which she claims is a reference to her passions for both astronomy and gaming, while a close reader can imagine that the State of Tennessee felt that the “69” portion of the phrase may have alluded to a more earthly passion.

Gilliam was told that she would face a fine and even the prospect of 30 days in jail if she didn’t agree to the state’s request. Her argument is that the First Amendment makes it illegal for government in all forms, including the Tennessee Department of Revenue, to discriminate against people for the views they choose to express.

So are vanity plates really a First Amendment issue? Lauren Scardella, a New Jersey lawyer, points out, “States are required to have an objective standard in deciding that vanity plate messages are or aren’t okay. While vanity plates might feel like a free speech issue to people, no state is forced to allow you to have a vanity plate. But when they do, there needs to be something more fair than an arbitrary decision as to what combination of letters and numbers are allowed on your plates.”

Yet back in November, in a California case, Ogilvie v. Gordon, a federal judge ruled that California can’t enforce a ban on vanity plates it considers “offensive to good taste and decency” as this would be a freedom of speech violation.

Plaintiffs here included a gay man in Oakland who is the owner of Queer Folks Records and wanted to use the word “QUEER” – his application was denied by the defendant, the Department of Motor Vehicles, which argued that his vanity plate might be considered insulting. Another plaintiff, a huge fan of the metal band Slayer, was told by the DMV that “SLAAYRR” would be considered “threatening, aggressive or hostile,” thereby failing to grasp not only nuance and irony but the nature of the band itself.

The oft-cited case in both Ms. Gilliam’s Tennessee lawsuit and the California decision is Matal v. Tam. Mr. Tam and his band, “The Slants,” wanted to register the band name with the United States Patent and Trademark Office. The application was denied because the USPTO felt the name would disparage “persons of Asian descent.”

The U.S. Supreme Court agreed with the U.S. Court of Appeals for the Federal Circuit and held that the Disparagement Clause of the Lanham Act of 1946 prohibits trademarks that disparage the members of a racial or ethnic group and violates the Free Speech Clause of the First Amendment.

In yet another interesting angle on this issue, Mississippi has been sued this month for charging an extra fee to have the word “God” removed from its license plates.

The background image on the standard Mississippi license plate is the state seal containing the phrase “In God We Trust.” For Mississippians who don’t want to display this image and phrase, the vehicle owners must pay an additional $33 for one of the state’s specialty plates, which have a pretty massive range of non-Lord branding, from deer to sunflowers to fraternities to (of course) the Tupelo Elvis Presley Fan Club.

Aron Solomon, JD, is the Head of Strategy for Esquire Digital and editor of Today’s Esquire. He has taught entrepreneurship at McGill University and the University of Pennsylvania and was the founder of LegalX, the world’s first legal technology accelerator. He wrote this for InsideSources.com.