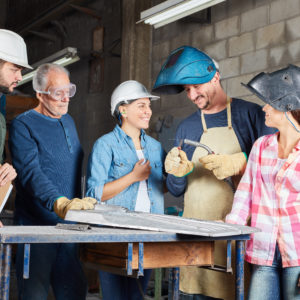 Apprenticeships Being Considered as an Answer to Abundance of Iowa Jobs

According to a Georgetown University Study released back in 2015, 68 percent of jobs in Iowa will require education and training beyond high school by 2025, compared to the national average of 65 percent. And of the 250,000 new jobs included in that 68 percent, more than half of them will require an associate’s degree, vocational certificate, apprenticeship, or occupational license.

Overall, “blue-collar” jobs will be the largest share of employment growth, at 60,000. What’s not to like about those economic odds? Iowa’s high-skill service and advanced manufacturing industries can’t field enough workers to fill their openings. According to Vermeer Corporation (Pella, IA) Outreach and Community Relations Manager Tori Vos, the company has between 90-110 jobs open within the company on “any given day,” ranging from welding to company leadership positions.

But while the state might have adopted the new jingle of “too many jobs, not enough workers,” industry partners, stakeholders, the governor, and the Department of Labor are going after a solution to the problem: apprenticeships.

In an economy with extremely low unemployment numbers, many companies, including manufacturers like Vermeer, are desperate for employees to fill vacant positions that are hampering economic output. Theories vary on why Iowa and other states in the Midwest are low on qualified employees. One argument claims that there’s a wide skills gap in the labor force in which many employed workers do not have the opportunity to move up to more challenging careers. Another is rural kids are moving to large metro areas upon college graduation, robbing smaller locales of a labor force.

But one thing stakeholders have agreed upon is that given the future rising need for education to obtain any job, the state would be wise to ensure that all forms of education are available to students.

That’s where apprenticeships have come in.

During the 2015-2016 academic year, Iowa community colleges had 152,649 career and technical education (CTE) enrollees, who were earning credits in the form of job training, apprenticeships, and technical upgrading. Still, Gov. Kim Reynolds expresses on campaign stops and newly-signed Future Ready Iowa Act promotional events that the state’s job board has 65,000 jobs available for the taking, and many more on the way in the form of information security, electricians, computer systems, and registered nurses.

Even with an upward trend of apprenticeships and hands-on learning opportunities for Iowa students, a key component in Reynolds’ pet project, the Future Ready Iowa Act, is to allocate funding to increase the number of registered apprenticeships in the state. The newly signed law features a registered apprenticeship expansion to help smaller businesses partake in on-the-job training that they might not be able to afford on their own, Director of Iowa Workforce Development Beth Townsend said.

“The training component can be challenging for smaller businesses, especially in rural areas,” Townsend said. “And [it] can be difficult to fulfill, and the legislation is aimed at trying to provide support for this.”

Next year, Reynolds has requested approximately $19 million to start the legislation’s initiatives, but the decision will ultimately come from the legislature, which passed the bill unanimously earlier in the session. Townsend said that the overall goal of the legislation is to have 70 percent of the state’s labor force have an education beyond a high school diploma by 2025 to be able to fill the new jobs. Townsend also said that the hopes of the legislation are to prepare and expose students and adults to the new era of high-skill labor and advanced manufacturing careers, in order to grow family income and strengthen small communities.

At an event to promote the Future Ready Iowa Act last week, Secretary of Labor Alex Acosta was encouraged by the leadership that the state is taking with apprenticeships, touted the success of an Executive Order signed by President Donald Trump last year expanding the country’s apprenticeship program funding. In addition, Acosta said that the Department wants to provide states the flexibility they need that best suits their situations, in the form of expanding non-registered apprenticeships. Acosta said that this would allow trade associations and unions to create their own programs that best fit the skills and experiences they feel are important. A statement from Reynolds’ office was released, stating that Reynolds is very interested in the possibility of expanding non-registered apprenticeships in Iowa. Reynolds has been serving on the President’s Task Force on Apprenticeship Expansion which has been exploring how to best promote and support apprenticeships across the country.

For Ruan Transportation (Des Moines), which recently launched its apprenticeship program in partnership with Des Moines Central Campus, finding and accepting participants is a way for the company, and industries as a whole, to cultivate its own labor force in the technology sector of the economy.

“Unemployment [in technology] is really low,” said Ruan Chief Information Officer Dan Greteman. “Basically, the entire technology sector needs to get more folks into the sector, gaining access to them early, getting them more excited about it, basically growing the next generation of IT talent is what I’m trying to do.”

For Vermeer, which also started its apprenticeship program within the last several months, apprenticeship serves as a gateway to the industry first, then as a gateway for the company to have a full time employee. The apprenticeship is partnered through the Pella Career Academy, and while it only consists of one student currently, there are already between 14 and 18 students signed up to partake in the program next term.

“There are people that are looking at apprenticeship as just another degree option,” Vos said. “I know we’re still using similar language: there’s the degree, then there’s the apprenticeship. But for some students this is just that other alternative to that degree that could really, if that’s not in their future, allow them to still pursue that career pathway that can keep them in a job and essentially keep them in the state of Iowa, which is also important to the Future Ready Iowa Initiative.”