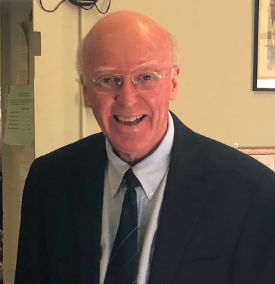 It took two ballots and came down to a single vote, but Bill Gardner was elected to an historic 22nd term as New Hampshire’s Secretary of State by the new, Democrat-dominated New Hampshire legislature on Wednesday.

Under the rules,  either Gardner or his opponent, fellow Democrat Colin Van Ostern needed 209 votes to win. The first ballot results were Van Ostern 207, Gardner 208 and one “scattered” vote (a ballot for a non-candidate).

The newly-elected (and clearly frustrated) Speaker of the House, Democrat Steve Shurtleff took the body into recess while supporters of the two candidates re-grouped. Then after a brief 3-minute speech for each candidate, the 416 House and Senate members present voted again, and Gardner got his 209.

“In my years in office, I have overseen 500 recounts where 11 ended in a tie and 32 ended up being decided by one vote,” Gardner said in his acceptance speech. “I never actually thought of myself ending up in one like that.”

Gov. Chris Sununu, who had predicted a Gardner win (though Sununu predicted it would be “overwhelming”) greeted the incumbent in the Secretary of State’s office with the cry “Forty more years!”

Van Ostern shook hands with Gardner and and said afterwards “I’m proud to get within a vote of Bill Gardner. No one’s beat him in 42 years.  He’s a legend in our politics and in our state.” The Democratic Party also tweeted out a message of support (“he has demonstrated great dedication and love for NH”)– which shouldn’t be news, given that Gardner is a Democrat.

Some of his fellow party members weren’t happy however, particularly progressives who haven’t forgiven Gardner for his participation on President Trump’s anti-voter-fraud  commission. They grumbled about the fact that at least 33 of their own joined with the GOP minority to support the moderate Gardner and defeat a loyal partisan like Van Osten.  One even tweeted that the New Hampshire Democratic Party should “find those that voted for Bill Gardner over Colin Van Ostern and punish them.” (It was a secret ballot, so…)

Gardner’s re-election is yet another data point indicating that New Hampshire Democrats aren’t in the same progressive mode as the national party.  In September’s primaries, for example, progressive candidates lost to more moderate competitors in the races for governor and the First Congressional District.  And neither of the new legislative leaders, Speaker Shurtleff and Senate President Donna Soucy, will be mistaken for Bernie Sanders or Alexandria Ocasio-Cortez.

The question now is what this means going forward, particularly for the 2020 presidential primary. There are at least 34 Democrats on the potential-candidate list (click here to see who they are), and the national party is already strategizing on how to avoid the mess the GOP experienced with a 16-way race in 2016.  Having Gardner at the helm means there will be fewer questions about partisanship in the New Hampshire primary (Van Ostern is a longtime campaign worker and more likely to raise questions about picking favorites, ala Clinton vs. Bernie in 2016).

And with the NHGOP re-considering its policy of remaining neutral in POTUS primaries involving an incumbent Republican (particularly when they’re named “Trump”), Gardner’s level-playing field approach will add subtle pressure on the party not to pick sides.

It’s widely believed that the 70-year-old Gardner won’t seek another term after this one, a fact that one of his supporters, Rep. Ned Gordon, reiterated in urging his colleagues to re-elect him. “I would like to see Bill finish his career gracefully,” Gordon said.