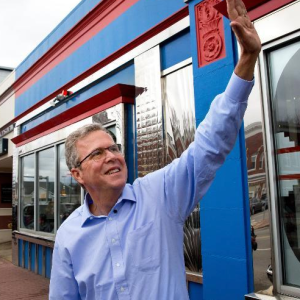 Former Florida Governor and 2016 Republican presidential hopeful Jeb Bush called out Twitter, Facebook, Instagram and others in a foreign policy speech Tuesday declaring Silicon Valley must do more to combat the influence of terrorist groups on their networks.

Speaking at the Reagan Library Tuesday night in California, Bush used the opportunity to make his first major foreign policy outline for his potential presidency. The elder Bush focused on the steps he would take to push back the spreading influence of the Islamic State, and laid the blame for the foothold the group has in Iraq and Syria on President Obama and 2016 Democratic frontrunner and former Secretary of State Hillary Clinton.

“Potential recruits of ISIS, ready for their own taste of violence, can even follow it all on social media,” Bush said. “It’s a time when mass murders have Twitter handles, Facebook, and Instagram pages, using these to add the veneer of glamour to their exploits.”

“We need to work with the owners of these relevant companies to give careful thought on how we address this problem,” he continued. “Among followers worldwide, ISIS is hailed as the strong horse, the glorious cleanser and restorer of Islam, and that word is getting out on western-based social media.”

The Brookings Institution released a report earlier this year that counted at least 46,000 Twitter accounts associated with the terrorist group in the latter months of 2014. An affiliate of the hacktivist group Anonymous released two lists naming more than 35,000 accounts in March.

Social media platforms have recently come under increased scrutiny from activists and government officials for failing to stem the online presence and influence of terrorist groups like ISIS. Twitter has been highlighted as a particularly egregious offender by a growing number of groups and government officials for failing to weed out content posted in support of ISIS, and suspend the tens of thousands of accounts regularly posting such content.

“This helps explain the spread of ISIS and the terrorist pandemic in the Middle East and beyond, including thousands recruited from Europe and more than a hundred from America, giving us ISIS terrorists with western passports,” Bush said.

Facebook has since updated its Community Standards policy to state the company will “work with law enforcement when we believe there is a genuine risk of physical harm or direct threats to public safety,” and Twitter began ramping up efforts to remove accounts this spring, claiming to have suspended 10,000 in April alone.

Those efforts aren’t enough for lawmakers on the Senate Intelligence Committee, who last month tacked a provision onto the 2016 Intelligence Authorization Act requiring companies to report terrorist activity on their networks.

Under the proposed measure, online social media and communications providers who obtain “actual knowledge of any terrorist activity” would have a “duty to report” it to federal law enforcement and intelligence agencies, and “provide to the appropriate authorities the facts or circumstances of the alleged terrorist activity.”

Companies including Yahoo and Google oppose the provision, and cited a recent Center for Democracy and Technology post alleging the legislation “would turn online service providers into law-enforcement watchdogs.”

“Online service providers would be tasked with scrutinizing any content that gets flagged to them for potential links to terrorism, putting these providers in the inappropriate position of deciding what counts as protected political advocacy or discussion of current events, and what sort of speech should put someone on a government watch list,” the group posted in July.

The debate comes at sensitive time for Silicon Valley on Capitol Hill, where in the Senate, Republicans are pushing to pass the Cybersecurity Information Sharing Act (CISA), which would make it legal for companies to share information about cyber attacks launched against them with intelligence and law enforcement agencies — a bill activists claim will open the door to more electronic surveillance.

Federal Bureau of Investigation Director James Comey has also made recent appearances in Congressional hearings to continue his push for back door access to consumer encryption products, which he and other law enforcement and intelligence agency officials claim are facilitating non-detectable communications and online activity for criminals and terrorists.

During one of those hearings, Comey said tech companies “are pretty good about telling us what they see,” and later on, added the FBI recently used information from Twitter to thwart a potential terrorist attack over the July 4 weekend.

The full Senate won’t take up the 2016 Intelligence Authorization Act or CISA until after Congress’ August recess.