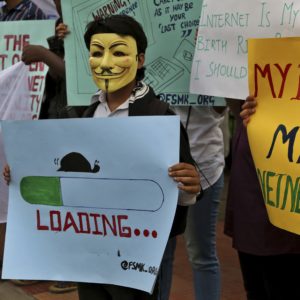 An activist wears a mask as he holds a placard during a demonstration supporting net neutrality, in Bangalore, India, Thursday, April 23, 2015. The principle of net neutrality is that online content be allowed to load at the same speed and forbids paid fast lanes favoring some content and says broadband providers can't slow Web traffic or block content. The Telecom Regulatory Authority of India last month put up a consultation paper on its website asking Internet users to give their views on net neutrality in India. The last day to vote for the campaign is April 24. (AP Photo/Aijaz Rahi)
News

The only remaining Democrats on the Federal Communications and Trade Commissions defended strong privacy and net neutrality rules Wednesday against criticism and threats of repeal from their new Republican leaders.

Commissioners Mignon Clyburn of the FCC and Terrell McSweeney of the FTC said dismantling strict privacy and open internet rules for internet providers passed under the Obama administration would harm consumers, and that both agencies need to continue working together on those issues.

The same rules reclassified ISPs as common carriers, pulling them out from under the jurisdiction of the FTC, which is legally barred from regulating such public utilities. The FTC under Democrat Edith Ramirez reviewed and supported the FCC rules.

“Anything that will take away consumer choice and opportunity to thrive in this space I think would be problematic,” Clyburn added while speaking alongside McSweeney Wednesday. “I think those four million people who weighed in on this proceeding at the FCC, I think we will hear from them and more if we tinker with something and possibly break it.”

The Republican commissioners newly tapped to lead those agencies by President Donald Trump — Chairmen Ajit Pai at the FCC and Maureen Ohlhausen at the FTC — have expressed desires to roll back the privacy and net neutrality rules passed by the FCC, and return oversight exclusively to the FTC.

Both Democrats said they oppose those pitches, along with a plan Trump has reportedly signed off on to shift all consumer protection authority from the FCC to the FTC.

Clyburn and McSweeney said both agencies should continue working together for consumers. Rolling back the rules, McSweeney said, would take a valuable protection away from the majority of Americans who only have one choice of provider for broadband and no guarantee of competition to ensure providers play fair.

“The only people likely to have competitive alternatives where competition can yield the type of protections that the open internet would provide them live in urban areas, live in wealthy areas,” she said.

Clyburn said consumers “expect clear rules of the road and a cop on their beat if something goes wrong,” adding it’s a “positive thing” the agencies have “overlapping jurisdictions.”

“I think that we should convene interagency groups to make sure that we are all on the same page,” McSweeney said of privacy regulation, where the FTC is regarded as the expert agency. “If the FCC’s privacy rules are withdrawn there would need to be serious conversation about how we are going to provide consumers protection.”

The FCC rules go beyond FTC standards by requiring providers to get permission from subscribers before collecting information including browsing history and app usage, instead of just sensitive financial or health information. Clyburn said the FCC gave consumers power over their privacy, and that it’s “overwhelmingly clear consumers want to be in the driver’s seat when it comes to their information.”

She added that while both agencies are influenced by the White House and Congress, they’re also independent and accountable to the public.

“They want to be included,” she said.

The two wrote an op-ed together in January defending net neutrality and privacy rules.

“The elimination of clear rules protecting a free and open internet would put us in uncharted territory and would create uncertainty for ISPs, edge providers and consumers alike,” they wrote. “In many ways, what the FTC and the FCC have accomplished these past eight years aligns with the promises of the next administration — standing up for the little guy, unleashing the power of the entrepreneur, and making sure that America continues to be the most dynamic economy in the world.”

Some of the agencies’ departed Democrats have been equally vocal in defending their work in the last administration, especially former FCC Chairman Tom Wheeler.

Last month Wheeler told Variety that the Trump administration’s plans to “modernize” the FCC by removing its consumer protection authority was “fraud” favoring big telecommunications companies, who’ve lobbied for such action for years.

“It is not surprising why they would want to transfer there. The FTC doesn’t have rule-making authority. They have enforcement authority,” Wheeler said, explaining the agency would only be able to prosecute “unfair or deceptive” violations after the fact.

“The FTC has to worry about everything from computer chips to bleach labeling,” he said. “Of course you would want to be lost in the morass.”

In January his successor said Republicans would “shift from playing defense at the FCC to going on offense” and “fire up the weed whacker and remove those rules that are holding back investment, innovation, and job creation,” critcisms Pai and other Republicans have leveled against net neutrality.