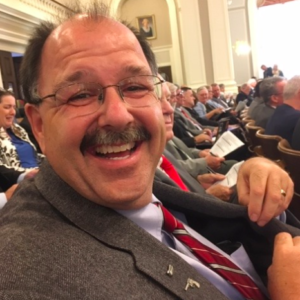 New Hampshire Speaker of the House Steve Shurtleff has removed a Republican state rep from his current committee assignment over a rude Facebook post just days after refusing to do the same for a member of his own party.

In the post, Burt calls Fish and Game Commission Executive Director Glenn Normandeau a “terrorist.” Burt has been a longtime critic of Normandeau who he has accused of overreach in his enforcement of fish and game regulations, particularly regarding hunters and other gun owners.

Normandeau was subsequently ousted by the Commission.

Burt’s removal from the committee over a month-old social media post stands in stark contrast to Shurtleff’s treatment of Rep. Tamara Le (D-North Hampton), who posted “F*** private and religious schools” on her FB page October 20.

After NHJournal reported on her posting, Shurtleff declined repeated requests for comment before — under pressure from his GOP House colleagues — temporarily removing Le from her post on the Education Committee.

Her committee regulates private and religious schools, while Criminal Justice and Public Safety Committee does not regulate the Fish and Game Commission.

House Republican Leader Dick Hinch was “fuming” (his word) over the Speaker’s treatment of Burt and the apparent double standard.

“Rep. Burt had serious concerns about how the Fish and Game Department was being managed, and he has a right to express those views, which he did without the use of vulgarity,” Hinch said. “His removal is a convenient distraction from the fact that a member of the Speaker’s leadership team used profanity towards private and religious schools, and gets an inconsequential suspension.”

“The Speaker must be more worried about his reelection and backlash from the progressive wing of his caucus than he is about holding all members to equal standards.”

Burt tells NHJournal that while he was stunned to get a letter from Shurtleff over a FB post, he’s not surprised at all that he’s being removed from the committee.

“It’s all about the Second Amendment, they’re just using this as a smokescreen,” Burt said. “They want me off the committee because I work so hard to protect gun rights, like opposing the ‘red flag’ bill. It just came out of our committee without a recommendation because I fought so hard against it. The Speaker wants me gone.”

Last week, the Democrat-controlled committee deadlocked on the red-flag legislation, HB 687, 10-10 when two Democrats joined Burt and the Republican minority and refused to recommend the bill for passage. The bill, which would allow family members of those deemed a risk to themselves or others to temporarily confiscate their guns, now goes to the full House in January.

But it does so without a recommendation from the committee, a significant setback for Democrats backing the bill. Hinch agrees that Burt is being targeted over the gun issue.

“The Speaker’s anti-Second Amendment allies are busy filing several bills for next year that will be before the Criminal Justice Committee, and I’m sure they take satisfaction in silencing a strong advocate from the committee,” Hinch said. “I’ve always known John to act in good faith in committee, and it’s unfortunate that they’ve tied his committee membership to opinions unrelated to the work and policy scope of his committee.”

Burt acknowledged that he’s been known for provocative FB posts that some find offensive or even incendiary. However, he says he’d come to an agreement with the Speaker.

“The Speaker and I had an agreement that I would be a good boy on Facebook for a while. We shook hands. And now he’s reneged because of the red-flag law.”

Shurtleff declined repeated requests for comment from NHJournal, as he has done since the Rep. Le story was first reported here, but he did tell InDepthNH.org that his actions have been consistent.

“My standard for all removals of members from their committees has been the same. First, I issue a warning in hopes that a member will change their behavior,” Shurtleff said. “If they do not, I remove them from their committee with cause, which is what happened with Representative Burt.”

Meanwhile, Rep. Le is expected to return to the Education Committee soon after the legislature reconvenes in January, despite insulting tens of thousands of students, parents and teachers in New Hampshire’s private and religious schools. She also retains her position in House leadership as an assistant majority floor leader.

Le has yet to apologize for her “F*** private and religious schools” comment, instead merely calling it a “bad choice of words.”