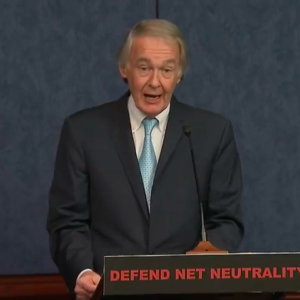 Democrats: Pai Will ‘Do the Bidding’ of Big Internet on Net Neutrality

Democrats targeted the new Republican chairman of the Federal Communications Commission Tuesday, describing Ajit Pai as a tool of the internet industry ready to “do their bidding” by repealing net neutrality — a move they say threatens free speech already endangered by President Trump.

Massachusetts Democrat Sen. Ed Markey gathered influential Democrats and pro-net neutrality groups on Capitol Hill to draw a line in the sand, saying they’ll resist any effort to repeal or not enforce the rules passed under the previous administration.

“The big broadband barons and their Republican allies want to turn back the clock and make big cable and big cellphone companies the gatekeepers for internet access,” Markey told reporters. The Massachusetts Democrat sits on the Senate committee charged with overseeing the FCC and frequently weighs in on agency issues.

“And they have a new FCC chairman in Ajit Pai who will do their bidding,” he added.

Pai voted against the rules prohibiting internet providers from blocking, throttling or favoring content passed by Democrats in 2015. The same rules were previously struck down in federal court, prompting the FCC to go a step further and reclassify broadband providers as public utilities. The designation subjects them to potentially tougher regulations like price caps.

Reclassification was the core of Pai and other Republicans’ dissent. Shortly after Trump’s election victory returning majority power to Republican commissioners, Pai said he would “revisit” the rules “as soon as possible.” So far he’s rolled back provisions to make smaller providers disclose billing practices and closed an investigation into free data programs Democrats say could hurt competition.

“I’ve called net neutrality the free speech issue of our time because the basic principles of our democracy are at stake,” Minnesota Sen. Al Franken said. “That’s why I’m concerned about the new FCC head Ajit Pai. He has repeatedly sided with corporations over consumers and his number one target appears to be taking down net neutrality.”

Vermont Sen. Patrick Leahy made a similar argument, adding that “we’ve had enough attacks on our freedom of speech in this country and freedom of religion,” referring to President’s Trump’s immigration ban and frequent bouts with the press.

Senator Ron Wyden of Oregon poked fun at Republicans for referring to the internet as “a series of tubes” when Democrats tried to pass net neutrality protections in 2006, and reminded supporters of the millions they mobilized to block the Stop Online Piracy Act over similar free speech concerns.

“We have shown again we can beat those odds,” he added.

Connecticut Sen. Richard Blumenthal said he hopes Democrats’ “fears are unfounded, but certainly the implications are we’re in for a fight.”

The group argued the rules are already on the books and have been upheld in federal court. Should Republicans undo them, they warned, they’re likely to hear from the more than four million who submitted comments to the agency in 2014.

Joining them were pro-net neutrality groups including Public Knowledge, Free Press, Fight for the Future and others along with the CEO of Vimeo subsidiary VHX, Jamie Wilkinson.

“We only exist because of net neutrality, which we take for granted,” Wilkinson said.

During the FCC’s first open meeting under Pai last month, the new chairman wouldn’t comment on whether his office will enforce the rules.

Republicans have long preferred a legislative solution over the FCC’s bureaucratic claim of authority over the rules. Senate Commerce Committee Chairman John Thune said at a conference last month he’s “committed to the cause” of net neutrality, and he encouraged Democrats to come to the table for congressional compromise.

“Who knows, the reality of a Republican FCC may help inspire some of my Democrat colleagues to embrace the idea that a bipartisan, legislative solution is the best possible outcome,” Thune said.

Thune’s Democratic counterpart on the Commerce Committee, Sen. Bill Nelson of Florida, has said he is open to a deal.