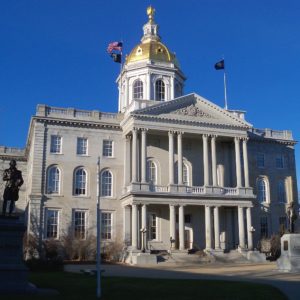 It wasn’t a good day for Democrats in the New Hampshire House. Lawmakers who were opposed to bills like election law reform and fetal homicide legislation saw that their efforts were futile in convincing a Republican-led chamber to defeat them.

Thursday marked the final deadline for the House to act on legislation that originated in the Senate before conference committees are set up on bills to reconcile any differences between the two chambers. Naturally, some of the most controversial bills were saved for this day and most of them passed the House despite protests and hard campaigning from Democrats.

Today has been a day of gut punches in #nhpolitics. Our resolve needs to be absolute https://t.co/qAJgSLhCop

The House passed Senate Bill 3, a bill tightening the identification requirements for people registering to vote, by a 191-162 vote. Only two Democrats voted for the bill and nine Republicans opposed it.

“I commend the support of the House in strengthening the residency requirements for voters in New Hampshire as there is nothing more sacred as a citizen of this state and this nation than the right to cast a ballot in a free and open election,” said bill sponsor Sen. Regina Birdsell, R-Hampstead. “This legislation does nothing more than ask a resident to provide proof that they live where they say they do and provides an additional layer of protections increasing the integrity of elections in the state of New Hampshire.”

This was one of the most hotly debated bills of the legislative session. Proponents say it closes a “domicile loophole” where people are allowed to vote in the state without being required to prove it. Opponents believe it’s a GOP bill to suppress voters, especially young people.

“Today’s vote in support of SB 3 was a partisan sabotage of the election process that will do nothing but confuse and intimidate new voters,” said House Minority Leader Steve Shurtleff. “This legislation adds over 350 words to the registration form that new voters will be required to read, and swear to understand, with the pressure of a growing line behind them at the polls on Election Day.”

The bill heads back to the Senate, which is expected to concur with small changes made by the House. If they approve of it, the bill will go to Gov. Chris Sununu’s desk where he is expected to sign it into law.

Democrats accused that the bill further perpetuates President Donald Trump’s claims that there is rampant voter fraud in the United States.

“This legislation was clearly designed to placate those who buy into President Trump’s discredited assertion that fraud cost him the popular vote in New Hampshire,” Shurtleff said. “Leaders from both parties denounced those assertions, and as we know from the reports released following every single New Hampshire election, voter fraud is not an issue in our state.”

SB 3 also has the backing of Secretary of State William Gardner, a Democrat. He said he doesn’t believe the bill places undue burdens on any voter. He was recently asked to sit on Trump’s voter fraud commission.

The bill also garnered interest from outside groups that spent money in the state to convince residents to contact their legislator to oppose the bill.

“As host of the first-in-the-nation primary, New Hampshire has the obligation to ensure our system is beyond reproach,” Sununu said in a statement. “This bill does exactly that and as such, I support SB 3 and commend the House of Representatives for their actions today.”

Democrats were also not happy about the passage of Senate Bill 66, legislation that defines a fetus at 20 weeks and beyond as a person for purposes of criminal prosecution of murder or other violent crimes.It contains an exemption for abortion. The bill passed 186-170.

Democrats tried several times during the session to table the bill, but those attempts failed. The bill was originally retained in the House Criminal Justice Committee a couple weeks again and lawmakers expected to work on it over the next few months. In a surprise move last week, Republicans reconsidered the bill and voted it ought to pass to the full House.

“Today, the House of Representatives passed a critical fix that allows prosecution of individuals who criminally end the life of a viable unborn baby,” Sununu said. “It provides security and addresses injustice for women who may have been in abusive situations that resulted in the death of a fetus.”

The bill will also go back to the Senate to concur on a House amendment and then on to Sununu’s desk, if approved.

There was a bright spot for Democrats when the House overwhelmingly passed Senate Bill 191 to fund full-day kindergarten in the state. The final vote was 231 to 100.

Approximately $1,100 per pupil would be sent to school districts for the program with the funds coming through revenues from Keno, the electronic bingo game, which is currently illegal in New Hampshire.

“The House of Representatives deserves high praise for moving full-day kindergarten forward and recognizing that this is a priority for many families in both considering the quality of a community’s public education and in their decision-making process when choosing a place to raise their children,” Sununu said.

The bill heads back to the Senate, which has historically rejected Keno. Democrats blasted the Senate budget for not funding full-day kindergarten in its proposal, but it’s not clear if tying Keno revenues to the program will deter it in the Senate.

“This bill is a long-overdue recognition of those benefits, and a signal to working families and the business community that we understand our obligation to offer all New Hampshire children the opportunity for a high quality education,” Shurtleff said. “Support of full day public kindergarten is a top priority for House Democrats, and I am pleased that the Republican majority has joined us in recognizing the benefit of this investment.”